Definitely the best thing I learned at the ICES convention this year was modeling chocolate (aka chocolate clay, chocolate plastic, chocolate leather, candy clay)! Many people are afraid of (or at least intimidated by) chocolate because it has to be tempered properly in order to use it.

Interestingly, chocolate’s melting temperature is below human body temperature so as you consume it, bot the texture and the flavor change. This low melting temperature makes it easy to melt chocolate, but it is extremely susceptible to burning. The other major issue people experience while working with chocolate is seizing. If water comes into contact with the chocolate, the sugar and cacao absorb the moisture and cause the chocolate to clump, or seize. Once chocolate seizes, you can continue to add water or cream to create a chocolate syrup, but you will never be able to recover this chocolate to temper it.

The best way to melt chocolate is microwaving for a few seconds at a time (this works best if you break your chocolate into smaller pieces first) or using a double boiler. To make a double boiler, bring a pot of water to boil on the stove. Set a heat-proof bowl containing your chocolate on top, making sure that the bottom of the bowl does not touch the water. This method is more time intensive but less prone to burning.

As a side note, candy melts (aka candy coating) that you can get in your local craft store do NOT contain cocoa butter so they do not need to be tempered.

In any event, I was among the masses of people intimidated by chocolate so I decided to take a few demos about it at this year’s convention. What I discovered was the incredible ease and versatility of modeling chocolate! I will be playing around with some recipes this week so I’ll post the ones I decide I like the best.

Anyway, I brought home some modeling chocolate from my hands-on classes with Bronwen Weber and B. Keith Ryder (see photos) so I played with it a bit. A LONG time ago, Shelby had asked me to make a cake for Ben’s graduation – similar to the graduate hat cake, but this time with a rat in a lab coat next to it. I immediately decided to do the rat in modeling chocolate! Not only was it incredibly easy, but he smelled divine!

This is Ben’s cake – an edible graduation hat sitting on top of a fondant dissertation (of course, Ben’s is much thicker than this one!). The mortar board is decorated with neurons because one of Ben’s neuronal images made the cover of a scientific journal! Yay! And don’t forget our little chocolate murine friend! 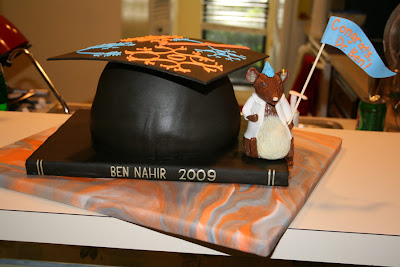 Here’s a close-up of the chocolate rat. I gave him a mowhawk because Ben had a blue mowhawk (that Shelby actually dyed for him) when Adam and I first met him. The thing on his ear is supposed to be an ear tag, which is a way some scientists identify their lab rats, but it looks more like an earing, doesn’t it? I made the rat a little chubby since my lab studies obesity – he looks a lot like our rats but smells WAY better! 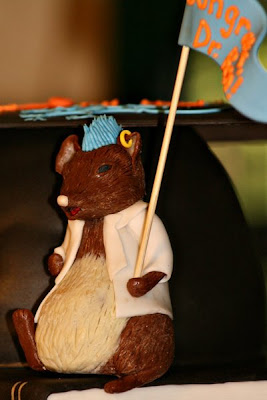 In Bronwen’s class, we learned how to hand-model faces with marzipan, fondant, and modeling chocolate. I’ll post the pictures of my faces soon, I promise! 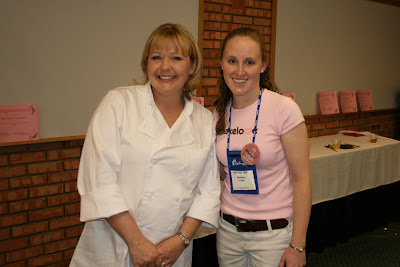 And in Keith Ryder’s class, we made a chocolate box. On the top of the box, we used chocolate transfer sheets (so fun yet so expensive, maybe I’ll demo it later…) and topped it with modeling chocolate roses. He’s holding my box in the picture. 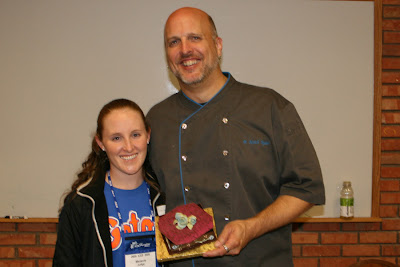 Both classes were awesome, and I also attended a demonstration by Mike McCarey (you know him from the Food Network Challenge) about all the wonderful things you can do with modeling chocolate.

12 thoughts on “The Magic of Modeling Chocolate”