Shelby and Nicole wanted to celebrate their birthdays together and they requested that their significant others order a cake from me for the party. The guys decided to keep it a secret, and 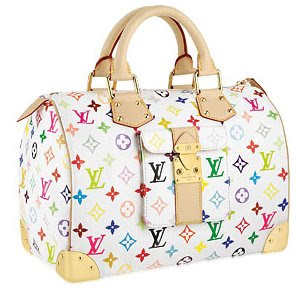 chose a cake in the shape of a purse! At first I was intimidated by the whole idea of a sculpted, 3-D cake, but once I started thinking about it, it didn’t seem so bad! So, I found a picture of an Louis Vuitton purse online and decided to replicate it:

To make it a bit more interesting, I also made them cell phones (Nicole got a Chocolate and Shelby got an iphone) a set of keys (Nicole’s went to a Bentley and her keychain was a Java City Espresso Shot cup because she loves coffee and her guinea pigs love to chew on those cups; Shelby “drives” a Ferrari and her keychain was a sushi replica because she’s a foodie), and a credit card with their sig. other’s name on it (as if they went shopping with their credit cards). 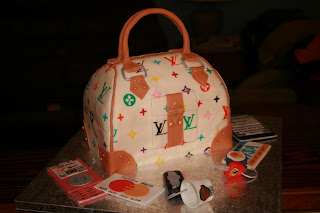 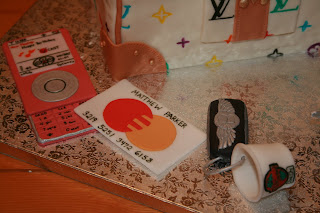 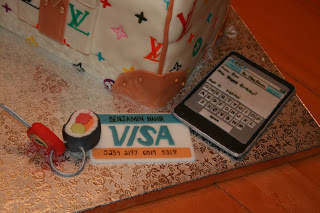 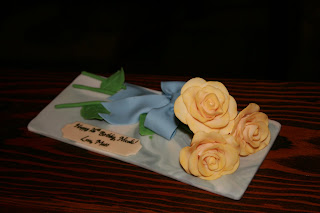 The cake was a yellow cake with raspberry cream filling and was covered in marshmallow fondant (more tasty than fondant you purchase already made). I also made each of the girls a sugar plaque with roses that was completely edible (although it probably wouldn’t taste that great).

Here is Ben cutting the cake: He ripped off the handles and cut right down the zipper! The girls were hoping the purse was full of money….keep dreaming! haha! 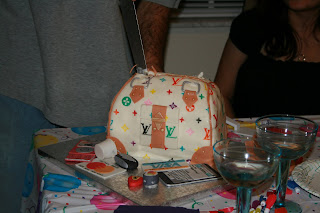 Thank you so much to Matt, Ben, Shelby, and Nicole for challenging me with this request! This cake will definitely go down in the books! Thanks, guys!