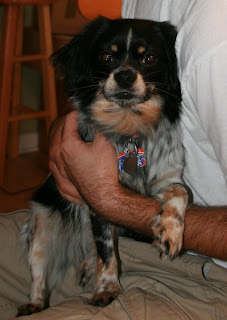 Over the last few months, Nani has become increasingly messy when she eats her breakfast and dinner. She has formed the habit of carrying a huge mouthful of food to various spots in the house, dropping all the food, and then eating each piece separately. The bad part about this is that she’s not careful to pick up all the pieces that she’s dropped. So, by the end of the week, we’re constantly stepping on little crumbs of dog food – even though I sweep the floors like twice a week! Well, we finally decided we’d had enough of that so we’re teaching Nani that when we say “Scraps!” she is supposed to pick up her crumbs! She’s a very stubborn dog so sometimes she looks at her scraps and looks back at us like “No way, crazy. I’m saving those for later!” We KNOW that she understands what she’s supposed to do – after all, she knows all her toys by name (Squeaker, Ghost, Rope, Hippo, Piggie (RIP), Dot (RIP), Puppy, Bone, Roo (RIP), Ball)! Anyway, here’s a picture I took of her last weekend on Adam’s lap. As soon as anyone pulls out a camera, she stops what she’s doing to pose. No kidding! In fact, I was taking pictures of Lorelei one afternoon and Nani started making all kinds of noises because she was jealous that she was not the camera star! Phew, how did we get such a crazy dog?!