Wow! Is it really over?! Did we really just run the Disney Princess Half Marathon last weekend?! It doesn’t seem that long ago when Elise asked me to run it with her and we started our training.

To be honest, I was really worried that I’ve have trouble finishing the race. I’ve been going to physical therapy for 5 weeks for knee pain, and I haven’t been able to run more than 5 miles at a time. So how could I expect to run 13.1 during the race?!

Well, we’d already paid for the race (it wasn’t cheap!), and we were so excited so I just decided to run as much as I can.

We arrived at the runner’s expo at Disney’s Wide World of Sports on Saturday after lunch. There was a red carpet leading us in the front doors and two handsome doormen! The princess treatment had officially begun. 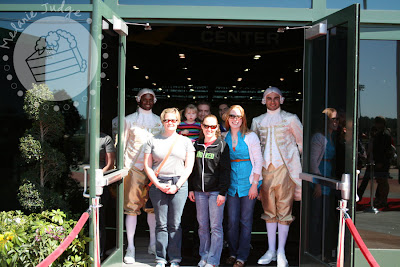 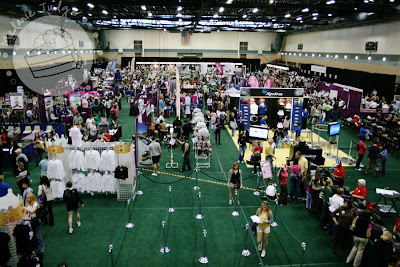 The expo was crowded with anxious runners and a lot of vendors with all the latest running gear and apparel. It goes without saying that we made a few key purchases. 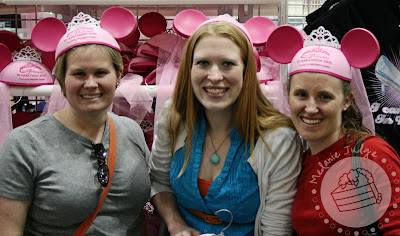 After the expo, we went for an early dinner and were in bed by 9pm! The three runners, Nikki, Elise, and I, roomed together and we put Adam, James (Elise’s hubby), and Lorelei (their kiddo) in another room so they could get a little more sleep. Nikki was soon snoozing…but Elise and I suffered from race-induced insomnia until after midnight. It was miserable! Let’s just say, your mind goes a lot of places while you lie in the dark for 3 hours. I pondered the genetics behind sleeping patterns, tried singing slow, relaxing songs in my head, etc. Our wake-up call came WAY too early – 2:50am. The race didn’t start until 6am but we had to be there by about 4am. Yikes! 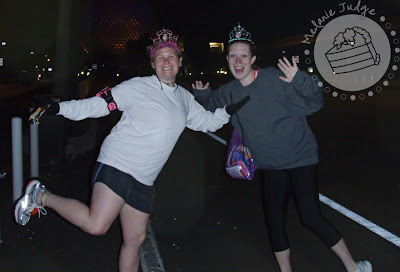 As soon as we got off the bus at 3:30am, we saw Spaceship Earth at Epcot! We were so excited! 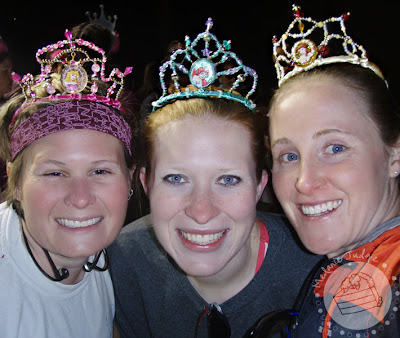 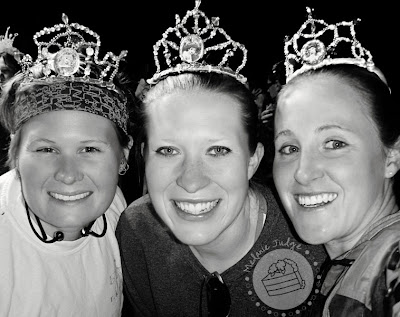 It was cold…In the mid 40s…and dark…I don’t know if I was shivering from the cold or the anticipation, but it was probably a combination of both. After walking 20 minutes to the starting line, I took this photo of the 3 of us with our tiaras. When we registered for the race, we were each asked which Disney Princess was our favorite. I chose Belle because she has gorgeous hair and ball gowns! Elise chose Ariel because of the red hair, and Nikki chose Aurora. Our bib numbers were all color-coded to match our princess of choice, and Nikki found these adorable tiaras at Walmart for us to wear. 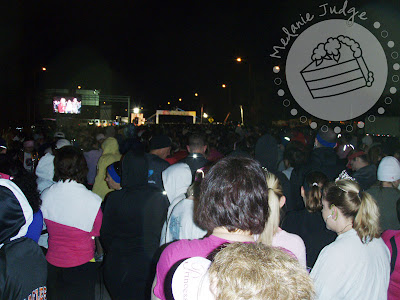 There were 13,000 registered runners so they divided us into 5 starting corrals depending on our predicted race pace. Here’s our view from Corral B! We thought we couldn’t get any more excited to start…and then they set off fireworks when each corral crossed the start line! Wow!

These are our “game faces” right before we started the race! Oh yea! Let’s go! 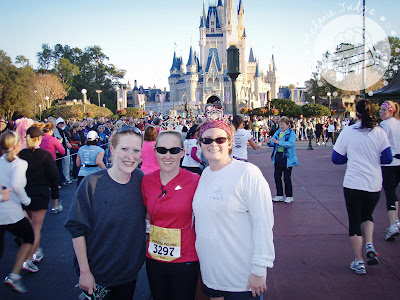 We ran from the Epcot parking lot to Magic Kingdom. That was definitely the most exciting part of the race! We had to stop and take a quick photo in front of the castle. 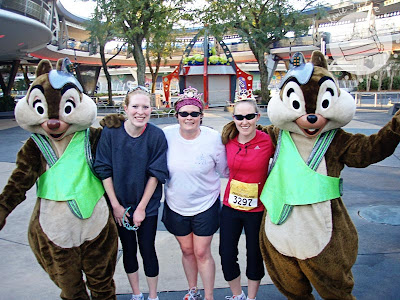 And then another photo with Chip and Dale in Tomorrow Land between miles 5 and 6. 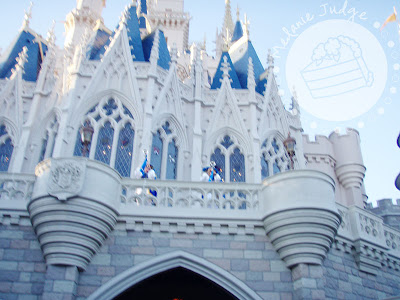 Then, we ran through Cinderella’s castle while trumpets announced our arrival! Talk about royal treatment! 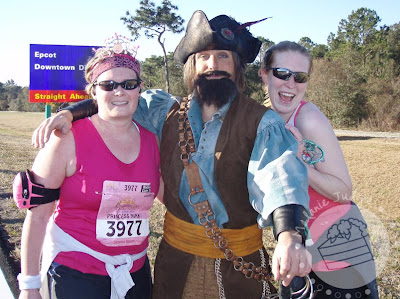 This was between miles 9 and 10. Nikki loves Pirates so we forced her to stop for a photo. And I think the lack of sleep was starting to get to Elise – she looks a little giddy in this photo. Uh oh, James! Watch out! She may have a thing for pirates! 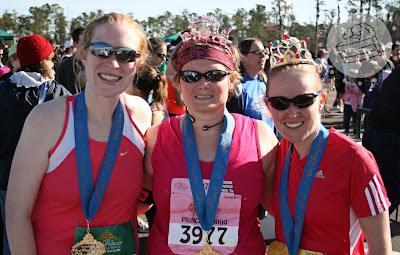 We all ran together until the last mile – then Elise took off and finished strong. I did my best to sprint during the last 0.1 mile but I don’t think I was really moving much faster. By then, my knee pain was almost unbearable. As soon as the race was over, I couldn’t bend my knee anymore…but… 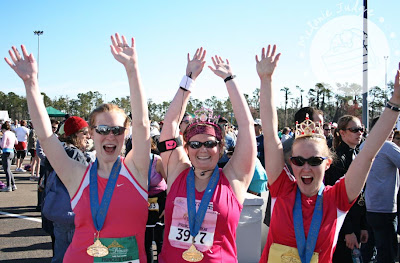 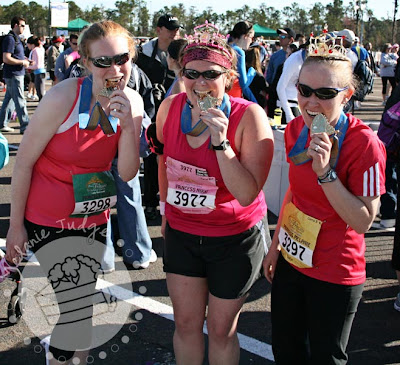 And we have these awesome, heavy-duty medals to show for it. I’m so proud of us. Actually, I’m proud of all of the runners! Over 11,000 finished the race – that’s awesome!

I get pretty emotional about things like this. When we passed the marker for Mile 10, I started to tear up. I was thinking, “Holy cow, I’m going to actually finish this thing!” I told Elise I was getting emotional and she turned to me and yelled, “What?! Man up!” That’s why I keep her around – for moments like that.

So I sucked it up, and started balling as soon as I crossed the finish line. Luckily, I had sunglasses on so no one could tell. Sneaky, huh? 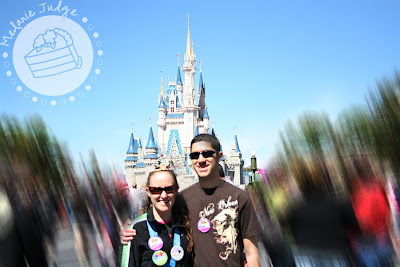 The 5 of us had all participated in the Disney Give a Day, Get a Day program so we had vouchers for FREE TICKETS to a Disney park of our choice after the race! We all went to Magic Kingdom and had a blast. Because I couldn’t bend my knee, Adam pushed me around in a wheel chair all day. I’m sorry, ladies, but I think I’ve already snagged the best guy out there! 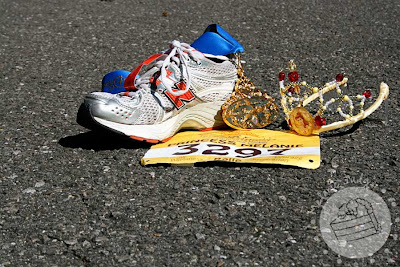 *Sigh* Well, it’s all over. It was an expensive weekend, but I’m already looking forward to next year’s race! I’m trying to talk Adam into doing the Expedition Everest with me, and the new Wine & Dine run sounds fun too!

2 thoughts on “2010 Disney Princess Half Marathon”