It’s not often that I get excited about a children’s movie being released in theaters, but the release of Toy Story 3 is a different story! Part of the excitement I feel is due to watching the Toy Story 3 Cakes episode on Food Network Challenge. And adding to the anticipation was the fun I had creating this cake for a boy’s 4th birthday: 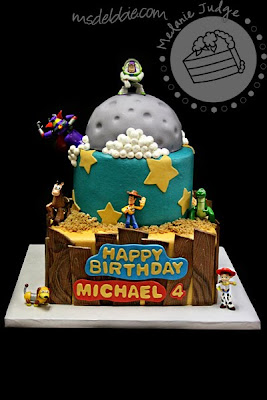 Michael’s parents found a photo of a similar cake on the internet and asked us to replicate it. I can’t find that photo online, but I did find this one from Dreemkagg’s Flickr Photostream: 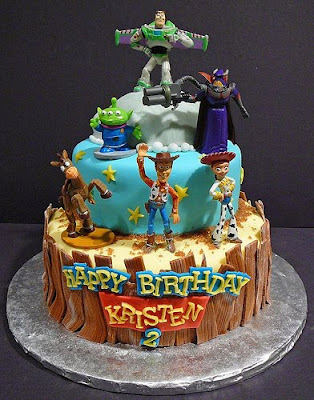 Obviously, this cake has been done more than once, but I can’t figure out who created the original. Super cute idea though! 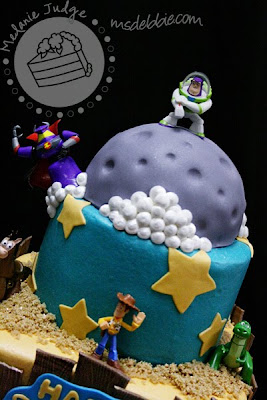 Anyway, the whole cake was decorated with buttercream, except for the moon. To best create the lunar craters, I covered it with gray fondant. 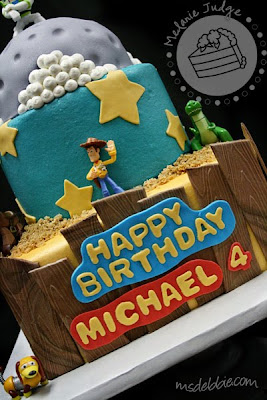 Michael’s mom purchased all the little toy figures especially for this cake, and I think they worked fabulously! He really didn’t want to leave the toys with us for the week, but we promised we’d keep them safe and return them on his birthday cake. It was a tough call, but he finally trusted us. 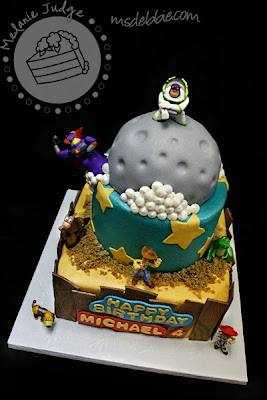 I’ll leave you today with a few fun quotes from the Toy Story movies:

Buzz: I’ve set my laser from stun to kill.
Woody: Oh, great. If anyone attacks we can blink em’ to death.

Mr. Potato Head: Oh, really? I’m from Playskool.
Rex: And I’m from Mattel. Well, I’m not really from Mattel, I’m actually from a smaller company that was purchased by Mattel in a leveraged buyout.