It’s the question every home baker eventually asks: “Which brand of stand mixer is the best?” Between the brand/model variability and the high price tags, the decision can be intimidating!

Today, I’ll compare and contrast two of the trendier brands – KitchenAid and Cuisinart. I purchased my own KitchenAid Artison in the fantastic wake-me-up Empire Red at Bed Bath and Beyond almost 2 years ago. (Hint: If you decide to buy yours from Bed Bath and Beyond, use the 20% off coupon – that’s a lot of money saved!) Then, I won the Cuisinart SM-55 in the Let’s Eat Cake competition in February 2009. The mixer was white, which matched my appliances perfectly! Here are my babies, facing off: 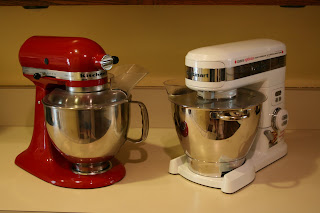 As a side note, you see those wonderful funny-looking things hanging down underneath my cabinets? They’re tap-lights. I thought I was being so clever when I put those under there. That’ll eliminate the cabinet shadows, I thought! Hmph. I think there’s more light under the cabinets without those wimpy little lights. Whatever, live and learn right?

Anyway, back to the showdown! 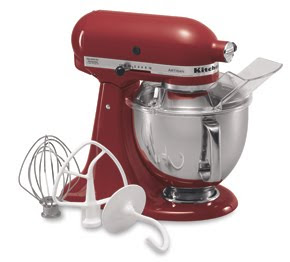 It has a 5-quart polished stainless steel bowl that locks into place with a simple twist and works with 325 Watts. On the right-hand side is a lever to lock the arm in the downward position during mixing (recommended, although I always forget). The left-hand side features the slide control for 10 mixing speeds. The silver thing on the front above the bowl is where you can place the many, many, many attachements available (pasta roller, ice cream maker, citrus juicer, ravioli maker, sausage stuffer, etc.) The KitchenAid comes with the 3 standard mixing attachments – wire whip, nylon-coated flat beater, and nylon-coated dough hook. It also comes with a plastic pouring shield that sits on top of the bowl to prevent excessive splattering and a plastic bowl scraper, which I’ve never used – I just prefer my handy dandy rubber spatulas for scraping.

Ok, enough technical stuff. What’s so great about it?

The bowl design is ingenious. First of all, it is simple to lock it in place or lift it off the stand, even when it’s full of cake batter. Second, the large handle is very comfortable to use while pouring batter into cake pans or scooping out buttercream. Third, the inside bottom of the bowl has a small peak that the mixing attachments rotate around. The small peak helps keep the batter moving as you mix.

The attachments are high quality and easy to put on the mixer. I always mix my cake batters with the paddle/flat beater because you never want to whip too much air into your cake batter. I use the wire whip for my buttercream. I’ll be honest: I was in a hurry one day. I threw some butter that wasn’t quite softened into my mixer and began making buttercream. The hard butter threw my wire whip out of alignment and I never could shape it quite right again. I decided to bite the bullet and buy a new one. After all, I use my mixer at least 2 times a week so I should have a whip that works well. I assumed it’d be expensive since it’s so high quality…wrong! $19.99! That’s nothing compared to the $300+ I spent on the mixer!

What I don’t like about it: The splatter shield is a little…jumpy, for lack of a better word. It rests daintily on the bowl while you mix, but I’m just constantly knocking it sideways or crooked! It doesn’t bother me much, but there’s definitely room for improvement on the splatter shield design. 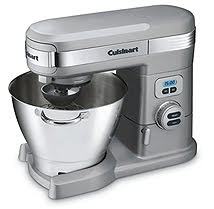 This sweetheart has a 5.5-quart stainless steel bowl that locks into the base with a slightly different twisting action and uses a whopping 800 Watts. The head lifts and lowers with the the flip of a small lever on the right-hand side of the base. The 12 mixing speeds are controlled by a rotating dial. Mixing doesn’t begin until you push the On/Off button, at which point the mixing speed slowly ramps up to the setting you’ve chosen. An added feature to this mixer is the timer – set it and walk away! The mixer will stop when the time runs out. Like the KitchenAid, the Cuisinart comes with the 3 basic attachments and a splash shield that attaches directly to the arm of the mixer.

What do I love about it?

The slightly larger bowl capacity means I can make more cake batter at one time! The timer would be fantastic if I used it! I’m not a timer kind of girl – I don’t even time my cakes while they’re baking (which drives Adam up the wall). But anyway, I love the idea of the timer! I do enjoy the ramping-up of the mixer speed to the setting I chose – it just seems fancy, doesn’t it? The attachments are high quality and durable. And, the splatter shield doesn’t move all over the place while I’m pouring in my liquid ingredients.

While the splatter shield is more sturdy, it is attached to the arm. Meaning that when you lift the arm to remove or scrape down the bowl, everything that you spilled on the splatter shield is now pouring onto your mixer and countertop. I don’t really consider myself a messy baker – you’re bound to get flour on the countertop, but why make a mess when you don’t have to? Again, there’s room for improvement with the splatter shield. Ideally, it should be securely attached to either the bowl or the arm, but be removable when you’re ready to lift the arm. Don’t you agree?

Second, the mixer only comes in 3 colors! THREE! White, black, and silver. Yes, I love my white mixer, but I also love color!!! And, I’ve only found 3 extra accessories: juicer, food processor, and pasta maker.

Third, the bowl design isn’t quite as ingenious as the KitchenAid’s. The bowl doesn’t seem to lock into place quite as well as I’d like, and the handles…well, just look at them! Can you even see them? There are 2 tiny handles on either side of the bowl. I can fit 2 fingers in each. Try pouring batter out of the bowl when you’re only holding it by 2 fingers!

Lastly, the attachments aren’t held as tightly in the arm as I’d like. I don’t mean to exaggerate, but it’s annoying when I’m scraping down the attachment and it falls right back into the batter again.

So who wins the battle??? 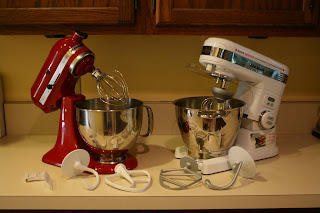 If you’d like a MUCH more extensive, scientific comparison of these models, check out this amazingly detailed review on cooking.com.

I’d love to hear your thoughts – what brand do you prefer? Are there things you love or hate that I didn’t mention? What color is your baby?