Mardi Gras 2010 is quickly approaching, and I’d be willing to bet that with the New Orleans Saints in the Super Bowl, it’ll be huge! This year, Fat Tuesday falls on February 16th. Did you know “Mardi Gras” is French for “Fat Tuesday?” Fat Tuesday always falls the day before Ash Wednesday, which marks the beginning of Lent. It is believed that the phrase “Fat Tuesday” refers to one last night of eating rich foods and participating in parties, parades, and celebrations before beginning the fasting and penitential season of Lent.

Mardi Gras is celebrated all around the world, but I think we’ll all agree that the celebration in the French Quarter is what first comes to mind. Mardi Gras season officially begins on January 6th, the Twelfth Night after Christmas. Traditionally, people celebrate the Feast of Epiphany on the Twelfth Night to represent the gifts the wise men brought to baby Jesus. In fact, one of the things customarily brought to these feasts is a “King’s Cake” in honor of those wise men!

Originally, King Cakes were simple rings of dough with little or no decorations. Now, however, bakeries go all out! Rich Danish pastry dough is braided and formed in to an oval or ring shape. Some bakeries have begun stuffing the dough with cream cheese or fruit fillings, and almost all are now decorating the top of the cake with sugar and Mardi Gras colors (purple, gold, and green).

King Cakes are perfect for breakfast, brunch, dessert, or just a snack. I would eat them all day long if it was socially acceptable!

Usually, a small baby figurine is inserted into the cake (yup, right into it). Then the cake is sliced and served. Whoever finds the baby is said to have good luck for the next year AND they have to provide the King Cake for the next party!

Well, lucky me! This year, Andy from Sucre contacted me and wanted to send me one of their King Cakes! Well, how could I say no??? You may recall Sucre from television. Their head pastry chef, Tariq Hanna, won 2nd place in the Food Network Challenge: Cereal Cakes, and he’s also been on TLC’s Ultimate Cake Off. 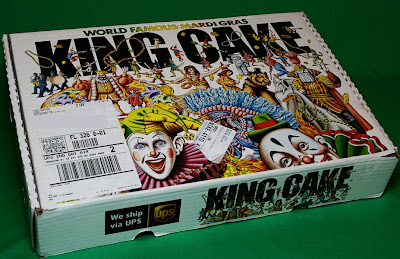 It just screams “Woohoo! Open me! It’s like a party in a box!” And with those big letters spelling out “K-I-N-G C-A-K-E”…I was already drooling.

Here’s what I found inside the “party box”: 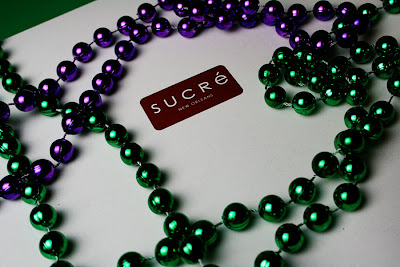 *Gasp* BEADS! And another box! It feels like Mardi Gras in my Florida house already! But, seriously, let’s get to the point of this post – the King Cake.

Sucre placed a small card in the “party box” with a bit of history and information about Sucre’s version of the King Cake. I won’t spoil the fun, but I will tell you that they also provide excellent instructions for heating the King Cake. And, oh my, trust me when I say…follow the instructions and heat it. It’s worth the 8 minute wait! 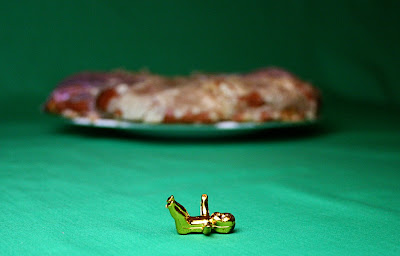 The instructions don’t specify, but I waited until AFTER I had heated the cake in the oven to insert the plastic baby. Seemed safer that way… 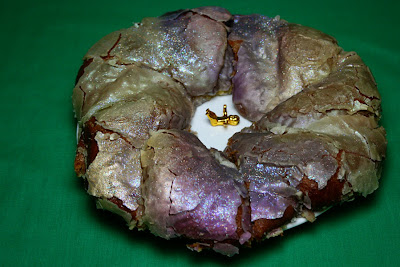 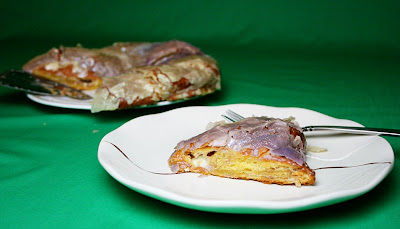 Right before I sliced it, I inserted the baby. Since I was the one inserting the baby AND doing the slicing…I strategically gave it to Adam. Does he still get good luck next year if I gave it to him on purpose? And, more importantly, does he have to purchase a King Cake from Sucre for me next year??? Please say yes.

So how did it taste? Oh, it was delicious. It melted in my mouth. The dough was perfectly baked – soft, buttery, and to die for. The cake is definitely sweet, but the whipped cream cheese filling takes away from some of that sweet so it’s not overpowering. And you can definitely taste the yummy cinnamon. Basically, Sucre’s King Cake is not something to pass up.

It’s only $19.99 and they have a special flat-rate shipping deal right now so it’s a real bargain! And while you’re at it, check out some of the other things Sucre has to offer. Here are a couple that caught my eye: 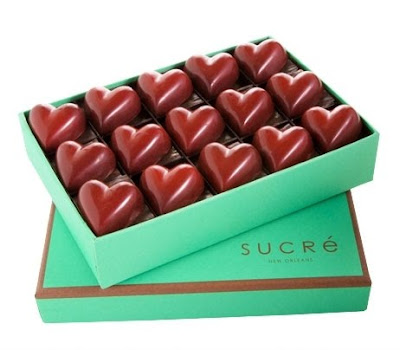 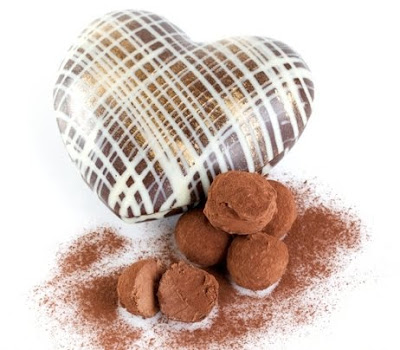 I give you permission to pass this on to your significant other…as a STRONG hint for Valentine’s Day. Of course, the reason you’re sending him/her this post is merely to educate him/her about some of New Orleans rich cultural history. It’ll make for great small talk during the Super Bowl, am I right???