The Collaboration of Scientists for Critical Research in Biomedicine, Inc. (CSCRB) is comprised of a group of current graduate students and alumni from the Interdisciplinary Program in Biomedical Science at UF (this is the program I’m in too). The group works as a nonprofit to help raise awareness and funds for research in areas that they feel are currently lacking attention.

For example, one of their committee member’s mother was recently diagnosed with Triple Negative Breast Cancer (TNBC), a very rare form but one that spreads rapidly. Her mother chose a treatment program that promised to prolong her life for anywhere between 2 months and 2 years…unfortulately, she passed away only 6 weeks later. Her diagnosis, however, sparked these graduate students to conduct literature searches to see what research has been done about TNBC. To their surprise and horror, very little was known about TNBC – except that there is no effective treatment for it!

You see, cancers usually secrete certain hormones in order to grow. Cancer treatments usually target these hormones to prevent their growth and cause the cancer to slowly die. However, TNBC secretes none of the hormones that you usually see from cancer so scientists and doctors have been unable to develop effective treatments against it.

Earlier this year, the CSCRB hosted a 5K run/walk fundraiser. They got a terriffic turn-out and raised a lot of money, but their ultimate goal is to fund a seed grant at UF for a laboratory to specifically research TNBC. They began planning the Gator Gala in hopes of reaching their goal. Recently, I was recruited by the group (I know, you were beginning to wonder what any of this had to do with me, right?) because of my abilities to “decorate my house”…hm…whatever!

The theme of the Gala was Set Sail for Discovery, and I was put in charge of event decorations. Of course, I volunteered to do the cake too! I, in turn, recruited Elise, whose major in event planning REALLY came in handy! The event was a success! We had a silent auciton, heavy hor d’oeuvres provided by Cabana Cove Caribbean Grill (yummy!), my cake, a special ballet performance, a jazz band, and a keynote address! The numbers are still being crunched, but so far it looks like at least 100 people came to the event (some people purchased tickets but didn’t come to the event) and we raised at least $10,000! 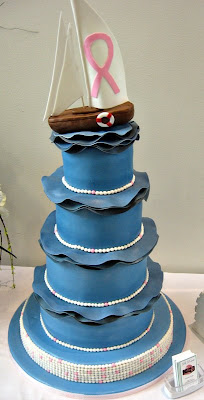 Here’s a photo of the Gala in action! All the volunteers worked hard while guests began to check-in: 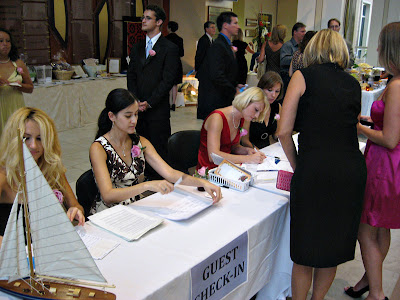 Oh, did I mention that the president of UF came??? Oh yes, here is Deborah posing with Chris & Bernie Machen! 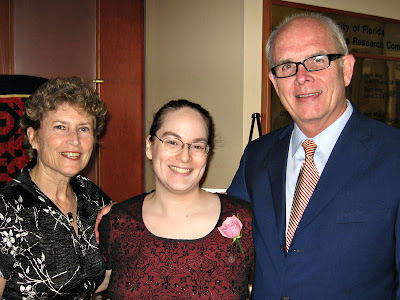 Here is a photo of me, Nicole, and Elise hanging out by the silent auction: 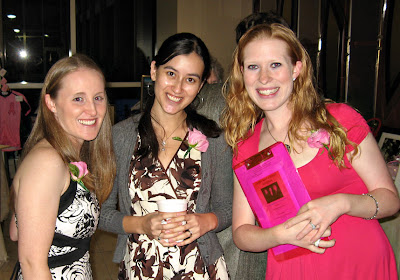 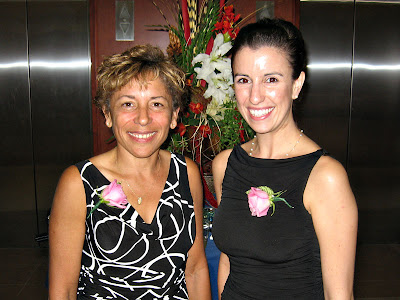 Me, Elise, and Michelle (both the Gator Gala and the 5K were done in her mother’s honor). During the Gala, Michelle gave a beautiful speech, and I don’t think there was a dry eye in the crowd. 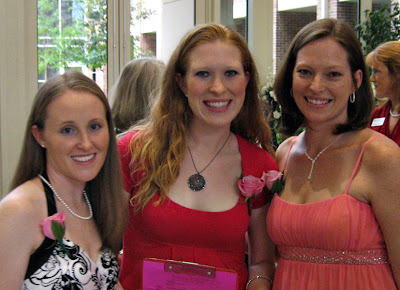 In honor of the Gator Gala, I’m giving away this great book Cancer Vixen! It’s a graphic novel, meaning it’s written in comic strip format, and it’s a really good read! I won it at the Gala’s silent auction and thoroughly enjoyed reading it, but now I want to pass it on so someone else can read it! 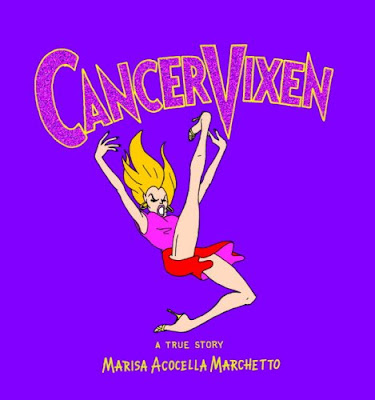 Everyone has been affected by cancer in one way or another – whether you’ve had it yourself or you know someone who has. To be entered in the drawing, leave a comment about how cancer has touched your life – or just say hi! I’m going to the ICES convention next week (woohoo!) so this contest will run until August 3rd. For those of you having trouble leaving comments, just click the link that says how many comments have been left for this post (underneath this post). A pop-up window should come up allowing you to leave a comment!