Last week, I had the privilege of making a cake and cookie favors for a very cute little boy’s birthday.

Apparently, West is really into garbage trucks! He gets excited when they come to pick up his family’s trash or recycling. In fact, the week of his birthday, they even let him help dump the recycling in the truck! How cool is that?!

So when his Mom contacted me to order his birthday cake, they (of course) wanted a garbage truck. We designed the cake based on photos of cakes she liked as well as photos of their local garbage truck. There were a few specific requests though. West wanted to make sure the cake had a front-end lift for garbage pick-up, not the traditional back loader, since that’s what their local truck has. And he also preferred 3 wheels rather than 2. In addition, they wanted a yellow caution light on the top of the cake near the back, a number 4 somewhere on it, and “Happy 4th Birthday West!” 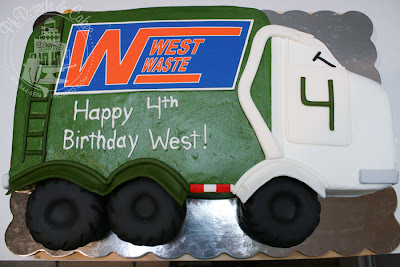 And you see that awesome logo “West Waste”? West’s father made that logo, resembling their local trash pick-up company, to coordinate with West’s Halloween costume last year. So the logo was a MUST on the cake! 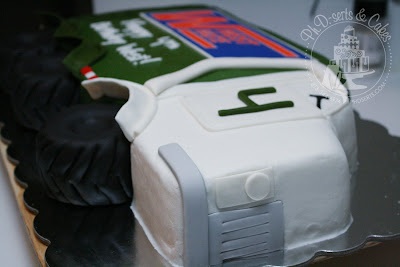 The wheels were made of Rice Krispies Treats covered in fondant, but everything else you see is CAKE! The cake was covered with green or white buttercream and the decorations were done with fondant. And the cake flavor? Vanilla cake with Bavarian cream filling – yum!

West’s Mom also ordered some garbage truck cookie favors for each of the party attendees. They were mini versions of the cake and were personalized with each person’s name. 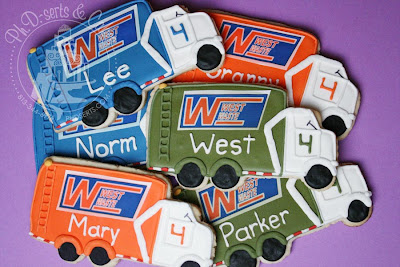 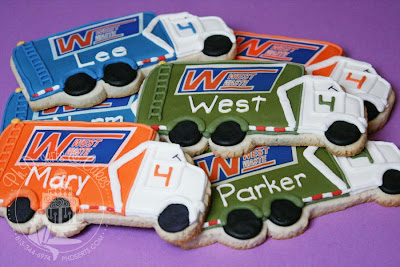 Look, it’s like a momma truck and a baby truck! 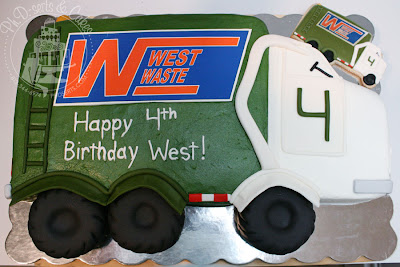