The hunt for the ultimate homemade brownie recipe is on! For a long time now, I’ve been meaning to find a really good recipe to replace the many box mixes I use. Don’t get me wrong, the box mixes are great! I always keep at least 2 in the pantry because you just never know when you’ll need a quick dessert. But I pride myself in baking everything from scratch so it’s high time I have a from-scratch brownie recipe!

I began researching different recipes, and I quickly discovered the sometimes intense debate about which is better – cakey or fudgy? People, I’ve found, are very opinionated about their brownie preferences! So as not to disappoint anyone on either side of the debate, I tested 3 recipes each of fudgy and cakey brownie recipes. In this post, I’ll only discuss the results of the FUDGY test. You cakey fans will have to wait til tomorrow – lo siento (that’s “sorry” in Spanish). 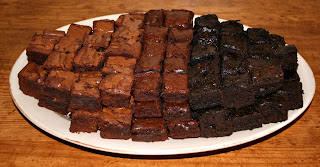 Much thought went into which 3 recipes I would test. Why didn’t I measure more than 3? I’m only one girl with one husband! We can’t eat tons many brownies, our friends and coworkers are very close to being sick of the free baked goods (I know, hard to believe it, right?), and I just feel guilty throwing away perfectly good food. Anyway, I chose 3. I made the brownies according to each recipe, omitting extras like nuts and frosting. This is a naked brownie comparison – I didn’t want the flavors of the extras to hide the true “personality” of the brownies.

The first recipe was from Baking Illustrated. This is my all-time favorite baking book! 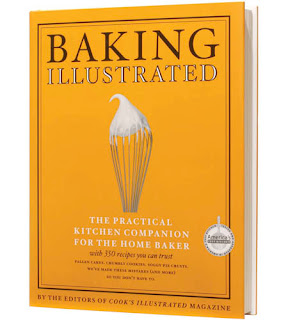 1. Adjust an oven rack to the lower-middle position and heat the oven to 350 degrees F. Spray an 8-inch square baking pan with nonstick cooking spray. Fold two 16-inch pieces of foil or parchment paper lengthwise to measure 8 inches wide. Fit one sheet into the bottom of the greased pan, pushing it into the corners and up the sides of the pan (overhang will help in removal of baked brownies). Fit the second sheet in the pan in the same manner, perpendicular to the first sheet. Spray the sheets with nonstick cooking spray.
2. In a medium heatproof bowl set over a pan of almost-simmering water, melt the chocolates and butter, stirring occasionally until smooth. Whisk the cocoa until smooth. Set aside to cool.
3. Whisk together the eggs, sugar, vanilla, and salt in a medium bowl until combined, about 15 seconds. Whisk the warm chocolate mixture into the egg mixture; then stir in the flour with a wooden spoon until just combined. Pour the mixture into the prepared pan, spread into the corners, and level the surface with a rubber spatula. Bake until slightly puffed and a toothpick inserted in the center comes out with a small amount of sticky crumbs clinging to it, 35-40 minutes. Cool on a wire rack to room temperature, about 2 hours. Remove the brownies from the pan using the foil or parchment handles to transfer to a cutting board. Cut into 1-inch squares. (Do not cut brownies until ready to serve; uncut brownies can be wrapped in plastic and refrigerated up to 5 days.) 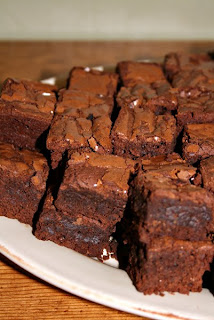 Baking & Prep: This recipe was easy to follow and excecute, but it used the most dishes of the 3 recipes tested here. The batter tasted very similar to the box mixes but with more chocolatey taste.
Appearance: The baked brownies were a mid to light brown color and had a nice flakey crust on top. In fact, they looked a lot like the fudgy brownies you can make with box mixes. However, cutting the brownies created a small mess because of the crumbs.
Taste & Texture: The brownies fall apart in the mouth and then coat it – it’s the ultimate chocolate-lover’s experience. They’re chocolatey, but not too sweet. They would be perfect with milk!
Overall Assessment: The day the brownies were cooked, these were easily my favorite. However, even after storing overnight in an airtight container, they dried out a little. If I were baking them again, I would do as the recipe suggests and cut only before serving, storing the rest in plastic wrap.

The second recipe was from the Baking Bites blog, and the actual recipe is from Alice Medrich’s Cookies and Brownies. What drew me to this recipe was 1) Nicole, the blog’s author, described these brownies as “the best [she] has ever had, hands down” and 2) you use a very unique baking method that I’ve never seen before. 1. Preheat the oven to 400F and line and 8-inch square metal baking pan with foil.
2. Melt the butter and the chocolate together, on top of a double boiler or in the microwave, stirring often until smooth. Stir in sugar, vanilla and salt. Add eggs one at a time, followed by flour. Stir until very smooth, about 1 minute. Add nuts, if using.
3. Scrape batter into prepared pan and bake at 400F for 20 minutes.
4. Meanwhile, prepare a water bath. Fill a large roasting pan with water and ice about 1 inch deep.
5. When the brownies are done – and they will look a bit dry on top – take them immediately from the oven and place in the water bath. Add more ice to the water if necessary. Allow to cool completely in the bath before removing the pan and cutting the brownies. Store in an airtight container for up to 3 days.

-The secret to this recipe is the baking of the brownies at a high temperature and then quickly dunking them in the ice bath. The ice bath halts the baking process from the outside in, creating a firm bottom for easier handling and a creamy, smooth inside. 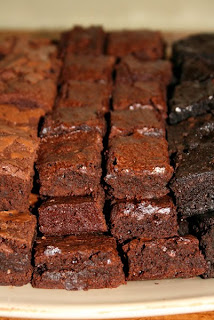 Baking & Prep: Of the recipes tested, this one used the fewest dishes, and the instructions were clear & precise. The ice water bath step takes some getting used to, but it’s not too difficult. The batter was very thick and fudgy, but not overpoweringly chocolately.
Appearance: These brownies are a deep brown color with a hard crust on top, and they were the easiest to cut because they are so dense.
Taste & Texture: They’re firm, dense, sweet, and very fudgy. They also have a really nice chocolate flavor.
Overall Assessment: As stated above, these brownies retained their fudginess and moisture for at least 1 week (they were all eaten by then). All things considered, these are my personal favorite!

The last recipe tested was from Susan Purdy’s Let Them Eat Cake, which boasts “140 sinfully rich desserts with a fraction of the fat” and has been featured on the Food Network’s website. 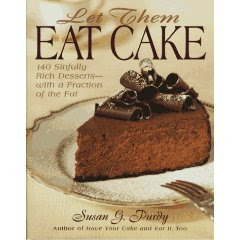 1. Position a rack in the center of the oven and preheat the oven to 350 degrees F. Lightly coat a baking pan with cooking spray.
2. In a small saucepan, combine the butter and chopped chocolate and set over very low heat until melted. Stir the mixture and set aside to cool.
3. In a medium-sized mixing bowl, whisk together the flour, cocoa, baking powder, salt, cinnamon, and nutmeg.
4. Measure the sugar into the large bowl of an electric mixer and beat in the cooled butter-chocolate mixture. Add the egg plus whites, vanilla, and water and beat well. Add the dry ingredients and mix on low speed just until blended. Don’t overbeat. The batter will be thick.
5. Spoon the batter into the prepared pan, smooth the top, and bake for 22 to 25 minutes. When done, the top will look dry and a wooden pick inserted near the edge will come out with a few crumbs but the center will look slightly gooey. Cool in the pan and cut into squares. 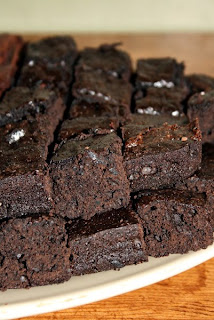 Baking & Prep: This recipe was easy to follow, but the list of ingredients is rather extensive compared to the other recipes tested. The batter tasted thick, fudgy, and chocolatey without being too sweet.
Appearance: These brownies were the most difficult to cut because they were very crumbly. The baked brownies are almost black in color, which I have mixed feelings about. Brownies should be…brown…shouldn’t they? And if they are such a dark color, I would expect a richly chocolate flavor…see Taste & Texture.
Taste & Texture: The brownies are not too sweet, and they definitely don’t scream “CHOCOLATE!” They have a subtle chocolate flavor – reminiscent of a dark, bittersweet chocolate. They are also much more cakey than fudgy in my opinion.
Overall Assessment: Frankly, not my favorite. While I can appreciate the dark chocolate, bittersweet flavor, these are not fudgy brownies. They’re cakey. Period.

A recipe can’t be thoroughly reviewed by just one person, right? Everyone has different opinions about the perfect brownie so I recruited friends, poker players (I happened to test these recipes on a friendly poker game night), and lab coworkers to help with the assessments. The Baking Illustrated and Baking Bites brownies were definitely the favorites! In fact, the crowd was pretty evenly split between the two. The Let Them Eat Cake brownies only got 2 votes…but perhaps those people prefer cakey brownies. Thanks to everyone who participated in the taste test!

Stay tuned: Tomorrow I’ll post the results of the Cakey Brownie Recipe Showdown! If you’re located in and around Gville, let me know – you can be part of the tasting panel. Lord knows I have LOTS of brownies on my hands right now!