All right, kids. It’s time for the Cakey Brownie Recipe Showdown! Game on!

The first recipe I chose is one I found on Cookie Madness, which is an adapted version of Frosted Cakey Brownies from King Arther Cookie Companion. However, just like the Fudgy Brownie Recipe Showdown, I did not include any extras in these brownies like nuts and frosting. 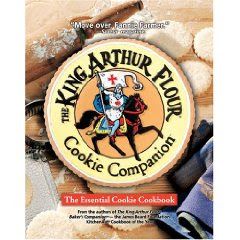 Frosted Cakey Brownies (without the frosting)

2. Melt butter in a microwave-safe mixing bowl. Stir in the sugar and cocoa, beating with a spoon. With the spoon, beat in vanilla, then beat in eggs, one by one. Beat in baking powder and salt (making sure baking powder is dissolved), then stir in water. When smooth, add flour and stir just until blended. Add chocolate chips if using.

3. Pour into pan and bake for about 28 minutes. Let cool. Lift from pan and cut into squares. 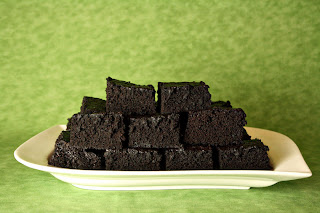 Baking & Prep: The list of ingredients in this recipe is definitely manageable. The batter was smooth and didn’t have an overpoweringly chocolaty flavor.
Appearance: The brownies are very dark, fluffy, and slightly sticky on top.
Taste & Texture: It’s definitely cakey! Of the 3 brownies tested, these have less of a chocolaty flavor and are more greasy than the others.
Overall Assessment: If you’re looking for a good cakey brownie, this is it!

The second recipe tested was from the Magnolia Bakery Cookbook. If you’re unfamiliar with the Magnolia Bakery, they’re famous for the desserts and breads. In fact, they’ve been credited with starting the modern “cupcake craze.” Just a bit of useless information: They’ve been featured on Sex and the City and The Devil Wears Prada (Remember the part when Andy goes to a bakery to get her boyfriend’s birthday cupcake???). 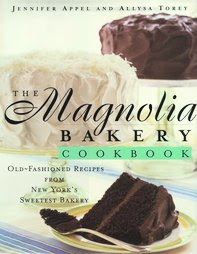 1. Preheat oven to 350 degrees F. Grease a 12×18-inch jelly roll pan.
2. In a large bowl, sift together the flour, the baking powder, and the salt. Set aside.
3. In another large bowl, cream the butter and the sugar until fluffy, about 3 minutes. Lightly beat the eggs, then add to the creamed mixture and mix well. Add the vanilla extract. Add the chocolate and mix until well incorporated. Add the dry ingredients. Pour the batter into prepared pan. Bake 25-30 minutes or until a cake tester inserted into the center of the pan comes out with a few moist crumbs attached. 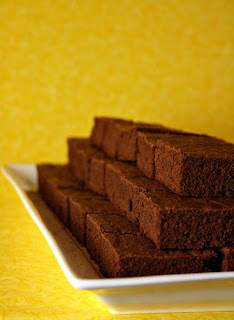 Baking & Prep: The list of ingredients is of average length, but the recipe calls for baking the brownies in a 12×18-inch jelly roll pan. This might not be something that the average person has in the household and baking brownies in this kind of pan is not very conventional so this might increase the difficulty level of making them. The batter is thick, creamy, and very enjoyable!
Appearance: The brownies have a nice medium brown color and are very easy to handle.
Taste & Texture: I found these brownies to be extremely dry…to the point that I couldn’t even finish one. (That’s saying a lot!) I would even go as far as to say that these brownies were just play awful.
Overall Assessment: Yuck! I have never had a more disgusting, more disappointing brownie. 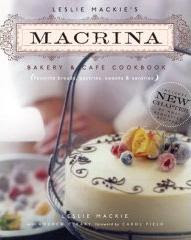 1. Combine chocolate and buter in a mediumstainless steel bowl. Place bowl on top of a saucepan filled with 2 inches of simmering water, making sure that the bottom of the bowl does not come in contact with the water. It’s important that the water be just simmering; if it’s too hot it will scortch the chocolate. Stir with a rubber spatula until chocolate and butter have melted and reached a smooth consistency. Remove the bowl from the heat and let cool to room temperature.
2. Preheat oven to 325 degrees F. Oil a 9-inch square baking pan.
3. Place sugar and flour in the bowl of your stand mixer and mix with the paddle attachment for 30 seconds on low speed. Increase speed to medium and add eggs, one at a time, making sure each egg is fully incorporated before adding another. Scrape the sides of the bowl frequently.
4. With the mixer on low speed, drizzle in the cooled, melted chocolate. Scrape the bowl with a rubber spatula to make sure you get all of the chocolate. Increase speed to medium and mix for about 1 minute, or until the batter is mousse-like in texture.
5. Pour batter into the prepared baking pan and spread it evenly with a rubber spatula. Bake on center rack of oven for 30-35 minutes, or until the center is just set. Let cool on a wire rack.
6. After the brownies have completely cooled, cut them into 3×3-inch bars, cleaning the knife between cuts. It’s best to enjoy these brownies the day they are baked, but they can be stored at room temperature for up to 1 day. The brownies will become very dense and fudge-like if kept in the refrigerator. 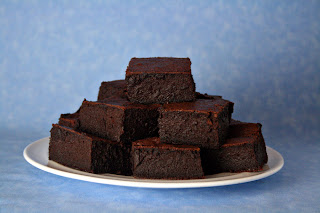 Baking & Prep: The directions are very easy to follow, and the ingredient list is short. It took me much longer than 1 minute to beat my batter to a mousse-like consistency, but it got there after about 10 minutes of mixing. At that point, the batter was very soft, airy, and chocolaty. My brownies also took longer (45 minutes) to bake because I used an 8-inch square baking pan.
Appearance: The brownies are gorgeous! They are medium brown, and they look very moist in the center but have a nice crust on top and bottom.
Taste & Texture: They were very light (but somehow dense at the same time…) and spongy. The cookbook claims that customers describe them as “chocolate cotton candy.” Yes, the texture is very light…but cotton candy? It reminded me more of a cheesecake texture, which I don’t find all that cakey.
Overall Assessment: They are very tasty and enjoyable! However, I’m not sure they belong in the cakey brownie category.

Again, I asked many people to taste the brownies (this time it was Gator tailgators and a few other friends). Without a doubt, everyone avoided the Magnolia Bakery brownies! Some people liked their chocolaty flavor but agreed that they were very dry. I honestly couldn’t taste the brownies because they were so dry…it was like I was drowning in brownie. It was stuck to my mouth and I couldn’t swallow it! And if you think I might have just screwed up while baking these brownies, check out the reviews at Amazon.com – other people have claimed the same problem with these things! But, anyway, I digress…
Most people were puzzled at the texture of the Macrina Bakery brownies. While they are very tasty, the texture is not one you expect in a brownie. Everyone was split between preferring the Macrina brownies and the Cookie Madness brownies. However, all agreed that if you’re looking for a cakey brownie, the Cookie Madness ones win!