My friends Jiejin and Jack got married this summer in China. Since it was literally on the other side of the globe, a lot of their friends from Gainesville couldn’t go to the wedding. They decided to have a little party here this week with a traditional American wedding cake and a champagne toast. This was my first wedding cake! 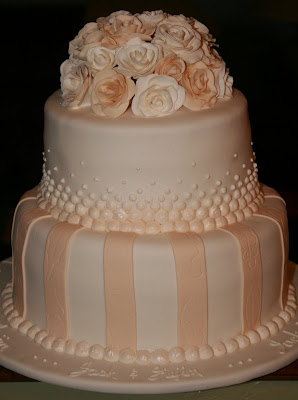 The cake was 2 tiers and each teir was made up of 3 layers – chocolate, marble, and yellow cake with raspberry cream filling. The tiers were covered in white fondant and decorated with various shades of ivory. There were about 27 roses on top of the cake…and I can make about 6 roses in an hour so that was time consuming! I put a little sparkle dust on the pearls and bubbles around the cake and then wrote their names around the base of the cake board. Here’s a few close-ups: 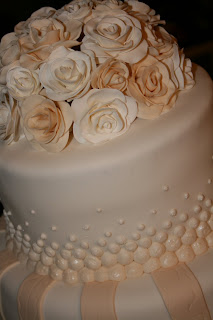 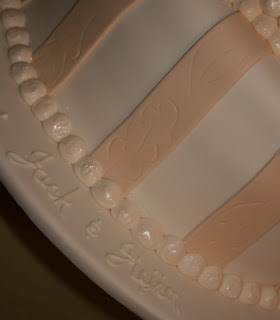 I had a few “caketastrophies” with this weekend. First, my 10-inch chocolate layer decided to just crumble into pieces when I tried to ice so I had to completely re-bake it. Then, when I stacked all the layers, they were too heavy and pushed the raspberry filling right out! I guess I shouldn’t be experimenting with the icing recipe while making an important cake! I had to scrape all the icing back off and remake it. When I iced the cakes a second time, it was a little better, but you can still see some bulges on the sides of the cake. I was really upset about it, but I always tell my students that part of becoming a “profesional” cake decorator is learning to cover your mistakes so I knew I had to keep working on it. I should have taken a before and after picture – the cake was so ugly it was making me sick to my stomach! I guess I did an OK job of covering up the problems, but you can still see them a little. In general, the cake was acceptable when viewed from 3 feet away and only from the front. haha!