Adam and I have always known that Nani, like lots of other dogs, is FULL of personality! This weekend, she was very quirky and I caught a few things on camera.

We gave her a Chew-Lotta bone on Sunday. She really likes these bones and I used to take them 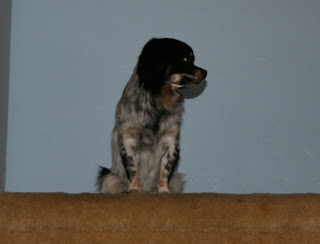 away when she was half finished because they’re big bones for a little dog! I guess my motherly instinct didn’t want her to spoil her dinner or get a tummy ache.
Anyway, not only does she not let me come near her 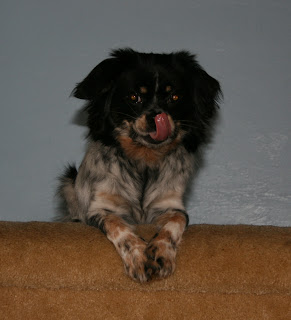 when she’s eating her bone, but she’s developed a habit of hiding it when she’s nearing the end. Usually we’re outside so she tries to
hide it in every bush nearby. This Sunday, she suddenly disappeared upstairs to hide it. I tried to sneak up the stairs to spy on her, but they were too squeaky so she saw me coming. 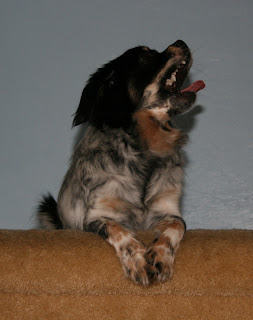 After she hid her bone, she proceeded to sit at the top of the stairs so she could keep an eye on both us and her bone. She sat there for a long time! While she was there, she must have gotten bored because she did a lot of yawning. If you look closely, you can see the bone still stuck in her back teeth! Yummy! 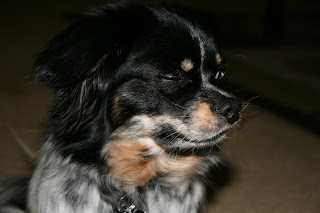 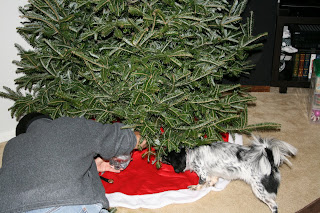 On Monday night, Adam & I bought our first Christmas tree! For those of you who’ve been in our house and recognize where we put the tree, don’t worry, we’re not leaving it there. We were trying to avoid rearranging furniture, but I really don’t like the tree where it is now. Anyway, Nani was both intrigued by and scared of the big green prickly thing! But she seemed to get over it and helped Adam water it a little while later. 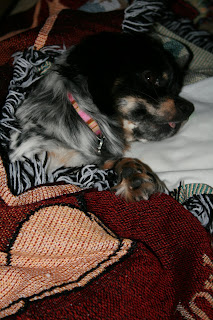 All that excitement must have really worn her out because she was just so sleepy that evening! Adam tucked her in with a blanket and she was snug as a bug in a rug! (Notice the little tongue peaking and paw peeking out. We did not pose her for this picture!)

I wonder if we give Nani too much credit or if she’s really as smart as we think she is! A while ago, she was making these funny pirate “aye” sounds so I thought, “Maybe she wants to play dress-up!” I put her pirate costume on her and she seemed content!

This morning, she was trying her darndest to get her Gators sweater off the shelf. When I took it down and put it on the floor for her, she nosed at it for a long time. I finally asked if she wanted to put it on and she ran over to me. I put it on and she seemed appeased. Could it be?! Ok, I admit the pirate costume was a stretch but you should have seen her with the Gators sweater today! 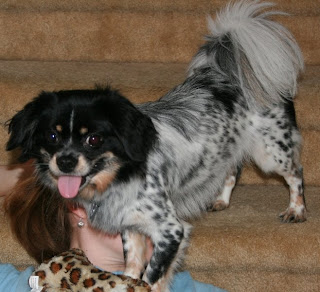 This one is actually from a few weeks ago but it goes well with the theme of this blog post. One day, Adam and I were playing with Nani on the stairs. (She likes to fetch things up and down the stairs.) Anyway, I was sitting – kind of laying – on the stairs and she was fetching her “Squeaker” (yes, this was before she destroyed her 3rd “Squeaker”). After she fetched it, she’d run back over and “kiss” Adam and I like crazy. One time, however, she ran over and stood right on me! Look how happy she looks! It’s like she sees nothing wrong with it! Like I was meant to be stood on! Hmph!