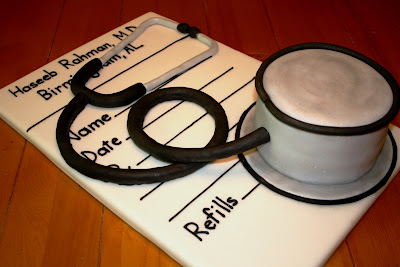 A friend of mine recently asked me to make a giant stethoscope out of cake for her brother’s graduation from medical school. My first thought was that the only part that can be cake is the round metal part that the doctor holds against your chest. If that’s huge, then the tubing and ear pieces will also have to be huge, right?! Turns out, she only needed to serve 10 people so a 6-inch cake was plenty big enough for them (thank goodness!).

So I knew that doing the giant stethoscope was feasible…but, how should I spruce it up a bit? I mean, a giant stethoscope just lying there is kind of boring, right? So I decided to decorate the cake board like a huge prescription pad with the graduate’s name on top. Sounds easy enough…

But then I remembered that writing with BLACK royal icing on WHITE fondant is just a recipe for disaster! Any little mistake and you’re done. If it were almost any other color, you could “erase” the mistake with a little water, but the black color is just so potent that you just can’t mess up!

Well, I did! I say all the time that one of my mottoes is that professional cake decorators are not perfect, they’re just good at covering mistakes. Wow, I just leaned something new! I didn’t know that is how the plural of motto is spelled, did you?? Anyway, I digress. When I began writing the brother’s name on the cake board, I realized halfway through the first name that I didn’t leave enough room for the entire thing! Not good! So, I removed the black royal icing as best I could, leaving a huge stain on the white fondant…and turned the board around! I redesigned the layout of the stethoscope so that the cake would sit right on the stained spot. Go back to the picture – can you tell where the stain is??? See? It’s all about covering mistakes!

Anyway, then I knew I had to be careful. I carefully spaced the rest of the words and it all worked out in the end. Phew! With working full-time in the lab and teaching classes 2 nights a week, I really thought I would need to work on this cake for a couple of nights before I completed it. But, I finished it all in one night – about 5 hours of decorating work. Does that mean I’m getting faster or am I becoming less of a perfectionist??? You decide. *wink*