This week, Adam and I returned from the fun times and many board games in Texas to the harsh reality of…dum, dum, dum…real life! And it turned out to be a busy week indeed! This marked the first week in which Elise and I are officially working as business partners. Together, we are determined to make Ph.D.-serts widely successful!

As I mentioned in a previous post, my cousin April had already asked me to do a baby shower cake and wanted to pick it up on Monday evening. Since the baby shower wasn’t until Wednesday, all the baking and decorating occurred on Sunday so the cake would still be fresh at the shower. We designed the cake based on a cake I’d seen in an American Cake Decorating magazine – a cute baby’s crib! Before I left for Christmas vacation, I had prepared the crib walls using what’s called “run sugar” because they need plenty of time to dry. When we returned to Gainesville after the holidays, I made a fondant teddy bear and a doll to sit on the bed. I was feeling ambitious so I also made baby blocks that read “welcome baby.” The baby blocks alone took me about 5 hours…let’s just say I won’t be doing that again in the future unless someone makes it really worth my time! On Sunday evening, Elise and I constructed and decorated the cake. For our first cake together, I think we did pretty well…but you can decide for yourself:

Here’s a shot of the entire cake: 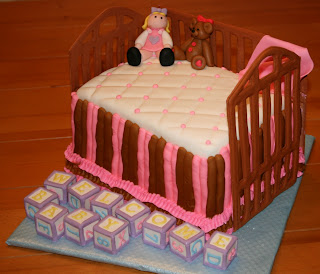 And here’s a close-up of the fondant figures… 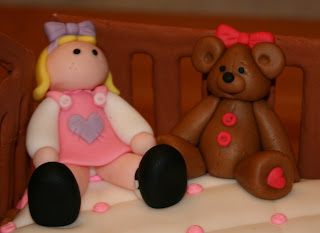 and the baby blocks:

On Tuesday, I found out a friend of a friend wanted a Gators cake to be delivered at 8am on Thursday morning. For people who may not be familiar with cake decorating, this is a very rushed order – especially when you have a day job so you can’t bake until you get home in the evening. I baked the cake on Tuesday night while Elise made all the buttercream we’d need. And on Wednesday evening, we decorated the cake! 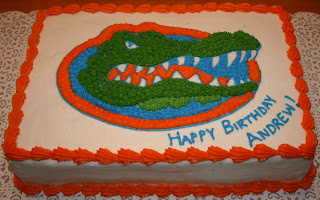 Considering we live in Gainesville and the Gators have been SO HUGE over the last 3 years, I think this could become a pretty popular cake. Don’t you think?

While we were decorating this cake on Wednesday evening, Elise got a call from a friend at church who needed a small wedding cake for Friday morning. Pretty much the entire wedding was being set up by someone other than the bride so we got very few details of what she like and didn’t like. Again, I baked the cake that night while Elise prepared all the buttercream. On Thursday night, we got together again to decorate it. The cake only had to serve 30 people so we made it 2 tiers with the cakes being 6 and 8 inches in diameter. As far as decorations go, we were only told that the bride liked red. Wow…now what?! We were able to find a relatively universal design and topped the cake with traditional red roses. 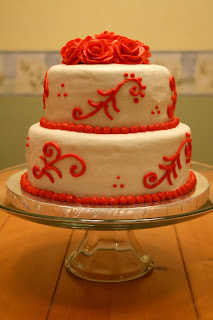 We have any requests for cakes next week yet, and we’re both ready for at least a couple of days off!