I have recently been hired as a new Wilton Method Instructor at the Gainesville Michael’s so I thought it’d be fun to post the pictures of my cakes from when I took these classes in April – August of this year.
It’s pretty crazy that I’ve only been decorating for about 6 months now and I’m already teaching these courses. It actually makes me nervous because I don’t know if I’m really qualified enough to teach already! There’s just so much that experience can teach you and I’m definitely lacking that. In any case, I play with sugar and icing as much as possible so hopefully I won’t run into any major problems.
I taught my first two classes on Monday and Tuesday of this week. Overall, they went really well and I think both groups seem very fun and receptive to new ideas. I had 11 people in Course 1 and 5 people in the Fondant & Gum Paste class. I’ll keep you updated on how these classes progress! 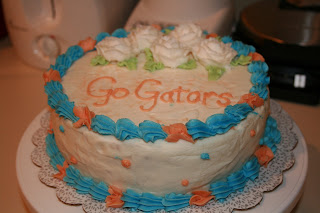 I made this cake before I took the class. For those of you who don’t know, my very first job was in the Publix bakery. I began as a bakery clerk, bagging bread and other goods, but I was promoted to Decorator’s Apprentice before I had to quit to go to Tally for college (Go Noles!). Anyway, I was an apprentice long enough to learn some basics, including borders and the buttercream rose. I decided to see what I could still do on this cake that I made for the spring Orange and Blue Game. Yea, I definitely needed a brush-up! 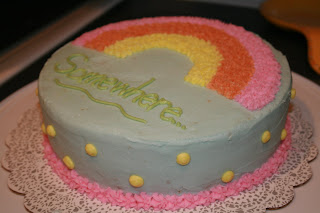 Here is the first cake I made in the first Wilton course. Yea, I realize that the “somewhere” is really under the rainbow instead of over it…but you get the idea! Anyway, this cake was really basic. We had learned dots, writing, and the star at class that night. The whole rainbow as well as the bottom border around the cake is made up of small stars. It’s a very easy technique but looks pretty nice when done correctly. 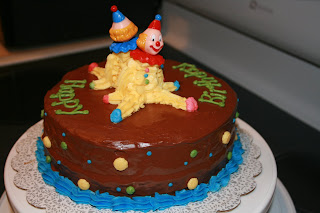 In the second session of the first Wilton class, we learned how to make these cute clowns and the border that you see on the bottom of the cake. I’ve always loved clowns so this was right up my alley! I made this cake in honor of Cody’s birthday, even though he was in Tampa and we ate it without him! 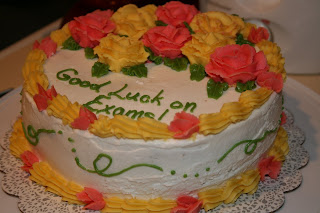 And here is the last cake I made during the first Wilton course. We finally learned the buttercream rose so I put a ton on this cake! This cake was given to the Phillips Center Box Office employees, wishing them good luck on their exams.