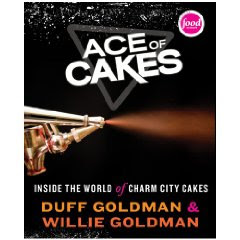 To celebrate the release, Food Network Magazine had a special article called the “10 Shocking Things you Didn’t Know About…Duff” in the November 2009 issue. Here is my paraphrased version:

1. Duff’s real name is actually Jeffrey Adam Goldman, but his older brother Willie (who is co-author on the new book) pronounced it more like “Duffy,” and the name stuck!
2. Before entering the Culinary Institute of America, Duff “worked [his] a– off at a variety of jobs,” including McDonald’s.
3. Duff used to express his creative side through graffiti, or “mural art” as he referred to it around his mom.
4. Duff’s first cake order was a rather funky-looking 5-tier cake that he completed on his living room coffee table.
5. Other names considered for the Ace of Cakes television series were: — You Let’s Bake, Bake it to the Limit, Charm City, and Doughboy.
6. Duff’s cake decorating crew make all the cake decorations before even turning the ovens on, ensuring the ultimate freshness.
7. Charm City Cakes offers 49 flavors, including bananas Foster and peanut butter & jelly.
8. Each 22-minute episode requires about 120 hours of video and audio footage in the bakery.
9. Duff plays bass in the band “…soihadto…” which is pronounced “so I had to.” Duff claims he only started the bakery because he knew he’d only get time off to play in the band if he was the boss. …So he had to…
10. Duff is from all over, not just Baltimore. He’s lived in Detroit, Missouri, Virginia, and California too.

Check out the full article and photos in the November 2009 issue of the Food Network Magazine. I love that magazine, but beware – some of the recipes have no regard for fat and calorie content. But, it’s a great read!