Before I show you the pictures of the graduation cake, I have to tell you the story behind it. Matt’s brother wanted to hire a stripper to jump out of a cake for Matt’s graduation party, but his wife Nicole (who writes this cute blog about her guinea pigs) wasn’t too keen on the idea. They compromised and she asked me to do a graduate cake with a mini “stripper” jumping out of it! Here’s the censored picture, for those with sensitive eyes. 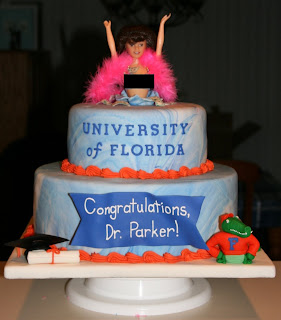 Just kidding! I’d never put something that wasn’t family-friendly on my blog 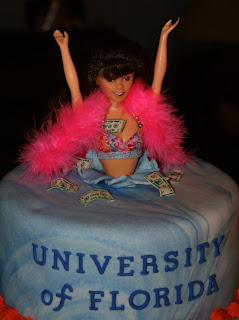 ! The doll is actually wearing a bathing suit, I promise. Here, look for yourself:

This cake is actually a lot smaller than it looks – only the top tier is cake! The bottom tier is a Styrofoam cake dummy. I thought the cake would look funny if she was jumping out of something that was too small for her to fit in! By using the dummy on the bottom, the cake looks taller and more impressive without adding a lot of time and labor to make the finished product! On the back of the cake, I attached little symbols that were personal to Matt and his family like a VW logo to symbolize his new car, legal balances to symbolize his plans to attend law school, a golf bag to represent one of his favorite recreations, and an Obama campaign logo because Matt recently became a US citizen and voted for Obama.

I made this little “beligerent Gator” (as J-dawg calls it) by request too: 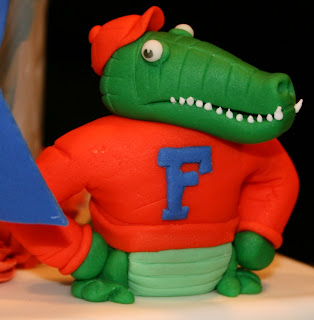 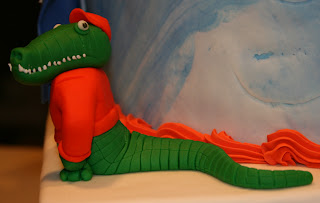 Now, you’re thinking…it looks ok, but there’s just something “not right” with Albert! Allow me to draw your attention to his legs, or lack thereof.

This figure was modeled with fondant, which can be pretty heavy. Two skinny fondant legs would not have supported his entire body so let’s just pretend he’s resting. Or, Adam said he looks like he’s coming right through the cake board! Whatever works for you!