This was a busy week for cakes! The second cake I made was for Steve’s graduation party. Steve and Lindsay are moving to Colorado in a matter of days so Lindsay wanted the cake to represent this move and Steve’s love of biking. My first thought was that I didn’t want the Colorado mountains to look scrawny! We all know how majestic and beautiful they are so I had to do them justice…but I also had to keep the cake size rather small and the costs relatively low. After all, they didn’t have 500 people coming to the party to help them eat a mountain-sized cake!

I decided to make paper mache mountains as a 3-D background (I haven’t done paper mache since grade school!). Then, the cake was the “rough terrain” leading into the mountains. I made a gum paste station wagon with Steve’s bright yellow bike on top. The entire thing was edible except for the 4 pieces of toothpick that made up the “bike stand.” 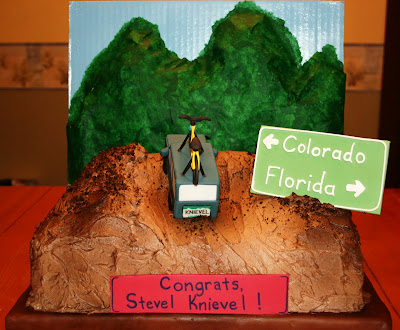 Lindsay also asked me to make the car’s license plate one from Colorado with the letters being “Knievel.” Such a cute idea! The license plate was easy to make: just cut some gum paste and allow it to dry for several days. Then use food-writer markers to draw the license plate and the letters! Piece of cake! (Sorry, I had to say it. Have I used that phrase on this blog yet? If not, shame on me! If so, sorry, I’m forgetful sometimes so you get to enjoy it again!) 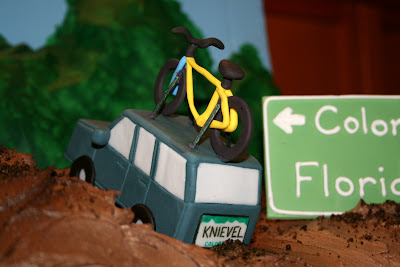 Thank you SO MUCH, Ben, for giving me an airbrush kit! It worked perfectly for this cake! You’d be amazed at how much depth a little brown airbrushing gave to this rough terrain! It was like a transformation!

Side note: To anyone thinking about airbrushing a cake, do it outdoors! I placed this cake in a big cardboard box, from which I’d cut two sides. I thought this was rather smart so that the cardboard box would catch all the airbrush color that went past the cake. Apparently, I have no concept of where the color goes when you airbrush…the color was EVERYWHERE! I only did quick little spurts of color on this cake and the entire thing took about 5 minutes! But later, Adam and I were walking around the kitchen and noticed the bottoms of our socks were turning brown…uh oh. I mopped the kitchen floors 5 times and I was still picking up the color! Dang, and I thought I was being so clever with that box. Oops!

4 thoughts on “Mountain Biking in Colorado”