Last weekend, Adam & I drove to Pensacola so I could enter a cake into the Panhandle Cake C.R.U.M.B.S. 2010 Fairytale Cake Decorating Competition. It was a tough decision to choose a fairytale on which to base my cake design. I really wanted to do an Alice in Wonderland cake but figured lots of people would do that, especially with the new movie coming out soon. Then, I thought about doing a 7-tier cake for Snow White where each tier abstractly represented one of the Seven Dwarfs. But…how do you abstractly represent Sneezey without a bunch of tissues or green goo…just not very appetizing…

So I finally decided to do Shrek & Fiona’s wedding cake! Fiona’s half of the cake would be a very traditional wedding cake with soft green accents. And Shrek’s half would be very “swampy” with lots of bugs and creepy crawlies. 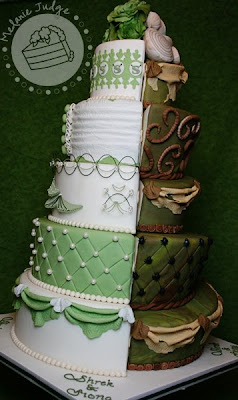 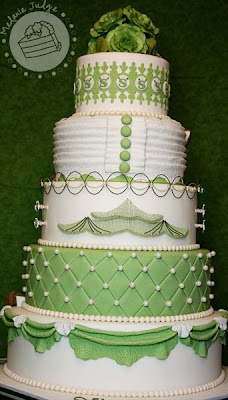 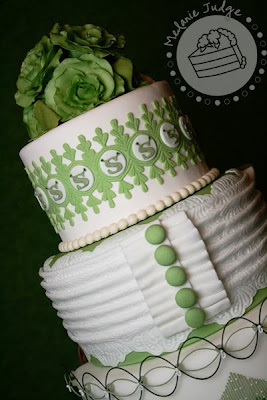 Fiona’s side was topped with roses – always a classic wedding flower. On the first tier, I used a lace mold purchased from CalJava and added the Shrek “S” with royal icing.

On the second tier, I used a different lace mold to create the pleating you sometimes see on a wedding dress. The buttons were made by pushing green fondant into a large JEM Cutters Daisy Center Stamp. 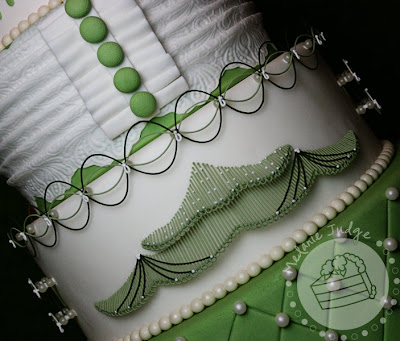 The third tier is my favorite because it has string work and extension work. Along the top and on the sides, you see Oriental Stringwork, which is basically strings that curve upward and downward. I just learned this technique from Geraldine Randelsome at the 2010 FL ICES MiniClasses so it was perfect timing! In the center of the tier, you see standard bridgeless string work. I promise, I’ll post tutorials on all kinds of extension work soon. I love it! If you ever plan to enter a cake decorating competition, plan some string work and extension work into your design. These techniques are highly regarded as a difficult thing to master, but it just takes patience and perfect icing. I can’t wait to show you how easy it really is!

The fourth tier was decorated with quilting. This is a VERY simple technique, especially if you have a quilting tool like this one. However, I am picky about what I spend my money on, so I create my quilting with a ruler. This is such a popular look right now so I had to include it.

And the 5th tier was decorated with lace drapes. Again, I created the lace pieces with a lace mold and just draped it across the top of the cake. It’s an easy technique but looks so nice!

And now for Shrek’s side: 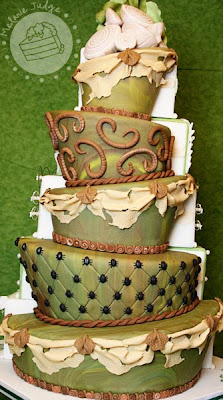 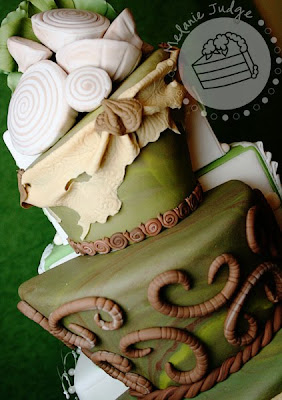 I topped Shrek’s side of the cake with onions. If you’re asking yourself, “why would she do that?” you need to go watch the first movie again! Ogres are like onions – lots of layers!

On this side of the cake, I wanted to recreate techniques cake decorators use…but with bugs! A “snail/bead border” is one of the first things you learn as a cake decorator so, naturally, I made sugar snails for Shrek’s side. I also used similar lace drapery except I browned this lace and tore it. Between each lace drape is a brown moth. The moths were Adam’s idea – love it!

Another technique that’s really popular on wedding cakes is swirly piping so I swamped it up a bit by making the swirls earthworms. These were fun to make, and someone actually approached me at the competition to ask if I had experience with earthworms since they were so detailed. Actually, I do! I’m a scientist, remember? I’ve dissected quite a few earthworms in my time. Hey, you can’t say I’m not using my degree. 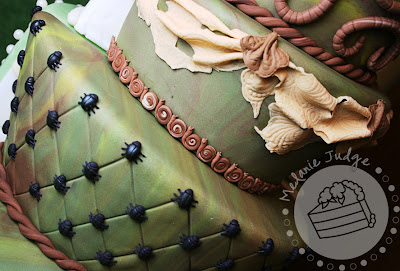 On the 3rd & 5th tiers I did some more draping – only because I couldn’t think of anything else to do!

And on the 4th tier, I did some quilting. But this time, instead of pearls at the line intersections, I made little black beetles. Yes, the beetles have 6 legs because they are in Class Insecta. Ah, see? There’s that science again!

After dropping off my entry at the competition, Adam & I went to get some chow. Mikkel recommended Peg Leg Pete’s so that’s where we went! 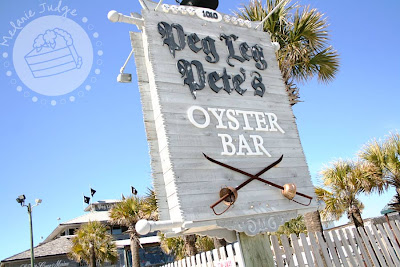 Then we headed back to the competition for the cake tasting competition and awards ceremony.
I was absolutely shocked and honored to find out that I won 3 medals: 1st Place Professional Division, People’s Favorite, and Best of Show. Yowza! (That’s my new favorite word. It’s fun!)

Adam had the camera and between the less than optimal lighting and my speedy movements, he couldn’t get a single clear shot. So…maybe if you squint at the screen, it’ll look clear… 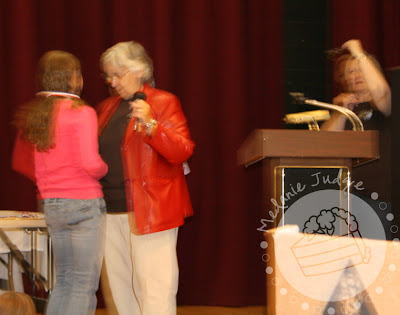 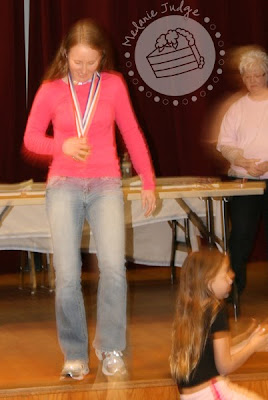 In order to receive the medals, I had to walk up a small flight of steps. We all know that’s reason to panic! I’m naturally clumsy and it only gets worse with so many eyes on me. So I was really concentrating on getting up the steps, getting the medal, and getting back down the steps safely. Finally, Susan (Competition Chair and the one with the microphone) grabbed me and made me stand still for a photo. Oops! 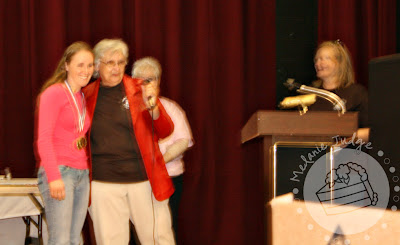 And after it was all said and done, Adam made me pose with the cake and the medals: 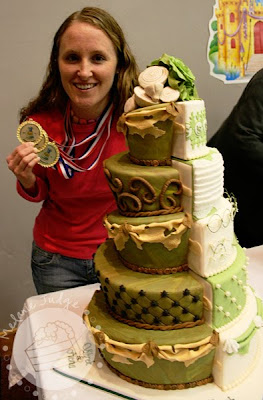 Miraculously, the cake made it to and from Pensacola (690 miles and 11+ hours in the car) without a scratch! I didn’t plan very well because we had only a half-inch clearance between the cake and the roof of the car. And loading the cake into the car required me to climb in and out through the trunk. Anyway, now it’s sitting at the Central Florida Fair. I’ll post more photos from both the competition and the fair soon…

So that’s it! End of story.

What’d you say? You want to know more about the cake tasting? Oh…you had to ask, didn’t you?

Well, there were 5 entries into the tasting portion of the competition. I brought a basic white cake with a layer of fudge filling and a layer of raspberry cream filling. Two of the other entries were pumpkin cake with caramel icing (by Rhonda Pulley and won 1st place) and a chocolate-covered cherry cake (by Sharon Posey and won 2nd place)! Then, there was a tie for 3rd! As soon as I heard that, I said to Adam “Wow, I’m going to be that one who doesn’t medal.” And sure enough…I was the ONLY one who didn’t win a medal in the tasting competition. Was my cake flavor not gourmet enough? Or did my cake just take awful? Hm… Well, now I know what to work on for next year’s competition!

In any event, I really enjoyed my day in Pensacola. I think at some point during the day, every member of the Cake C.R.U.M.B.S. club came over to talk to me for a minute. They were all so sweet and welcoming! I’m already looking forward to next year’s competition, and I’m hoping some of my fellow central and south Floridians will join me!