I haven’t blogged about a decorated cake since the September 5th Mahi Mahi! Can you believe it!? Are you going through buttercream withdrawal??? Yikes! Per the doctor’s orders (I’m a future doctor you know…well, Ph.D., but whatever!), we need a buttercream fix now!

Here are some of the cakes I’ve done over the past month but never posted on the blog.

First up, I was asked to make this cake for a 50th anniversary party: 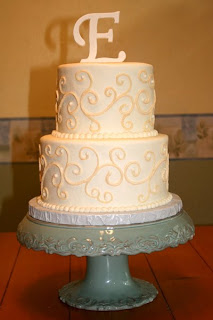 It was made of 6- and 8-inch round yellow cakes with buttercream filling. Then, the cake was iced in buttercream and finished with ivory & white buttercream swirls & dots, and the whole thing was topped with a gum paste “E” for the couple’s last name.

Next, I made this cake for a friend’s birthday: 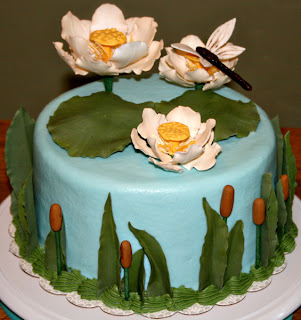 She loves a particular kind of lily flower that she sees on a local lake so I made them in sugar form to top the cake. The flowers, cat tails, leaves, lily pads, and dragonfly are all gum paste. The cake was iced in light blue buttercream, and all the gum paste decorations, which were made days in advance so they could dry, were added on.
Then, I decided to try my hand at a topsy turvy (aka whimsical) cake. I had never made one but always wanted to so I figured…why not?!

This is actually my least favorite cake on this post. I made it for myself so I’m allowed to be critical, right?

I find at least 2 huge faults in the cake.
1) The bow is way too big. It covers up the cake tiers. Can you even tell it’s a topsy turvy cake? I know, tell me about it.
2) Two tiers is not enough for a topsy turvy cake. I think you really need 3-4 tiers for it to really look its best. 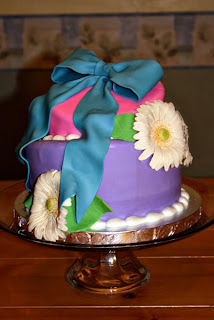 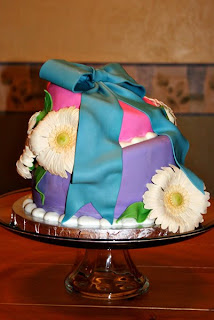 I’ll probably be making another topsy turvy cake in December for a graduation party for my sister and me…stay tuned!

And last but not least, here are some cookies I made last weekend: 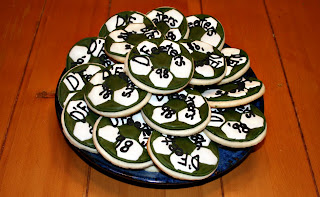 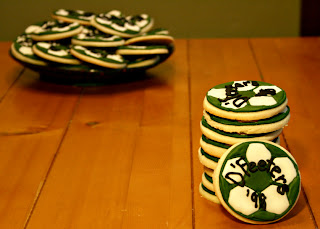 I know, they’re not cakes, there’s no buttercream on them…but they’re still very sugary! The soccer balls were decorated with royal icing and topped with the words “D’Feeters ’98” because that’s the team name. The cookies are supposed to arrive in TX today.