I’ve just completed my second official cake! This request came from my labmate Mike, who wanted a cake for his sister’s birthday party. Apparently his sister really likes her new pool so he wanted a cake that resembled the pool. I was told the following: his sister is “busty” and has brown hair, she has a dog that digs all the time, the pool has a waterfall on one end, and she has 2 reclining beach chairs. Of course, I was told a lot more about the pool, but there’s only so much you can fit on a 9×13-inch cake! 🙂 Ok, so here’s the finished cake: 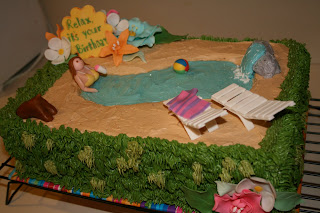 In case you can’t figure it out, that brown thing in the bottom left corner is the dog digging with his hiney in the air. haha! Here’s the view of the cake from the side: 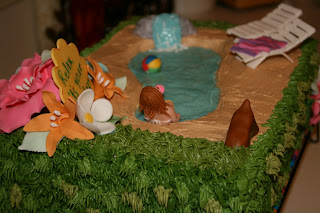 And here are a couple of close-up pictures to give you more details: 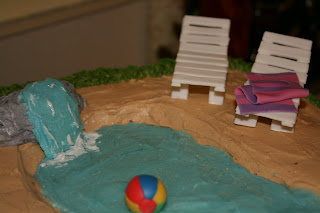 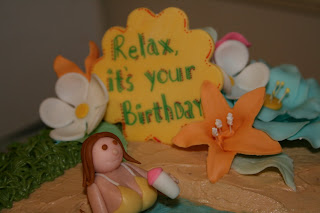 This is a chocolate cake with chocolate buttercream filling. It’s decorated in buttercream and the flowers, girl, dog, chairs, beach ball, and towel are made of fondant.

Mike, thank you for your support! This cake allowed me to explore a little more of what can be done with buttercream. Not all cakes must be covered in fondant to be beautiful and fun!

Lessons learned from this cake:
1. Decorating with buttercream is much faster than fondant!
2. Next time, use a double layer of cardboard under the cake to better support the weight.
3. Don’t try to multitask while carmelizing sugar. This cake was supposed to have a carmelized buttercream filling…but after 2 batches ruined, I had to scrap that idea and go with chocolate filling.