This weekend we took Nani to a 1-mile race that you run with your dog. There were all kinds of dogs there – from a dog that looked just like the one from Beverly Hills Chihuahua to large, powerful ones. Coming into the race, we knew they were going to give away prizes like “Most Likely to Pull Owner,” “Dog-Owner Look-Alike,” etc. Of course, we were hoping for a prize, but we really just wanted to have some fun with Nani and attempt to socialize our little scaredy cat!

She did really good in the race! We let the majority of the pack go ahead of us before we even started running. Nani is especially nervous when things are behind her. Once we started running, it worked out well because there was a little boy running right in front of us. Nani loves to chase kids so she was having a great time! We ended up passing the little boy and the pack spread out enough that no one was directly behind us anymore. By that point, Nani was really running in stride and she was doing awesome! Every once in a while, we’d pass a dog on a poopy pit-stop and we’d crack up laughing. We have no idea what place we came in, but we were proud of her for running the whole mile!

After the race, they started giving away the prizes. Our little Nani won the highly coveted prize of “Cutest Dog”! Here are a few pictures we took of her back at home after the race. 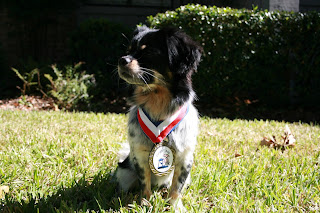 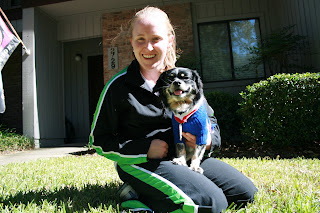 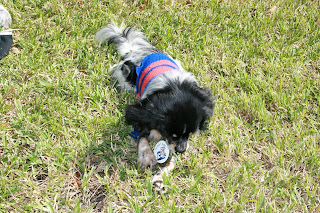