Adam and I just returned from a week-long vacation in the Outer Banks of North Carolina. I have been wanting to visit the Outer Banks for years now so we were so excited to be finally going!

One of the reasons I’ve been wanting to visit is my favorite author, Nicholas Sparks (think Nights in Rodanthe, Message in a Bottle, The Notebook, and A Walk to Remember which have also been made into major motion pictures), always uses North Carolina as his setting. He makes the North Carolina towns seem idyllic, the beaches like paradise, and the whole thing purely romantic. Anyway, check out his books, they’re amazing!

First, we drove up to Roanoke Island and stayed at the White Doe Inn Bed & Breakfast. I highly recommend this one! It was a 5 minute walk to the waterfront and downtown dining, set in a quiet neighborhood, and had absolutely gorgeous grounds! They served a 4-course breakfast every morning that was delicious. I know what you’re thinking…”4 courses? Aren’t you stuffed afterwards?” Well, sure, you’re full – but not overly stuffed. Course 1 is a light fruit parfait, 2 is southern-style grits (which most people didn’t eat because they were from the north and weren’t accustomed to them), 3 is the main dish (anything from pancakes, to hash browns, to French toast), and 4 is dessert. Oh yea, dessert! Adam & I usually skipped the grits and shared the dessert (cheesecake, strawberry crepes, etc). So yummy! Here are a few of my favorite pictures from the Inn, including the ones of the room we stayed in, the Garret Bedchamber: 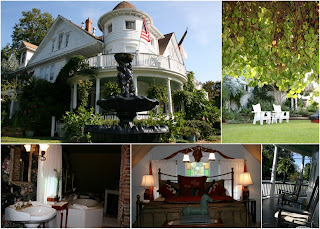 On our first day there, we visited the Elizabethan Gardens, which are beautifully landscaped and usually filled with gorgeous blossoms. However, September doesn’t seem to be the best time to visit because there weren’t many flowers. In any event, the grounds were still beautiful (see the 2 photos on the right)! Then, we went to the Roanoke Island Festival Park where there was a replica of a boat used by the English settlers and an English settlement. Roanoke Island is where the English settlers first landed and set up camp – did you know that? Here, Adam played Skittles with a “settler,” I swabbed the deck of the ship, and Adam lowered the ship’s anchor. 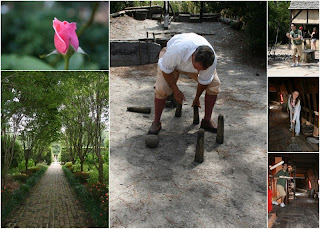 The following day, we went further east and north to see the Currituck Beach Lighthouse and the Whalehead Club (the house with the large green lawn in front), which is a large mansion-like house that has been restored so people can see what life was like on the islands in the early 1900s. We ate our first vinegar-based North Carolina-style BBQ at the Duck Deli, and we’ve decided that we prefer the molasses-style BBQ we’re used to down in Florida. We also stopped at the Monument to a Century of Flight (see the photo of the globe with the pilars around it), which lists all the major events in flight – from the first flight to our adventures in space. 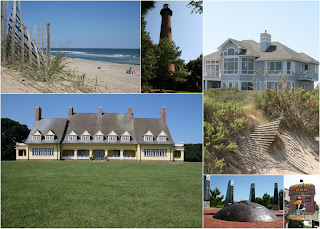 On Day 3, we visited Kill Devil Hills where the Wright Brothers conducted their first flights, the Bodie Island Lighthouse, and Jockey’s Ridge, which is the largest natural sand dune in Eastern United States. These pictures don’t do it justice – the dune was huge! 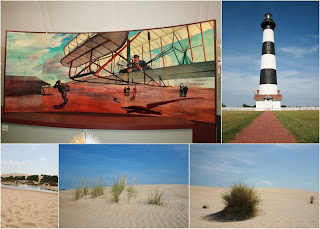 Halfway through our trip, we relocated to a new bed and breakfast on Hatteras Island. The Inn on Pamlico Sound is located in Buxton, NC, and we stayed in the Jasmine room. The room had amazing views of the sunset over the Pamlico Sound but was a bit noisy because it was located directly over the restaurant. It was amazing how different the two bed & breafasts were. The first one was ornately decorated, and this one was definitely “not your grandma’s bed and breakfast” (to quote an article written about the Inn). The Inn on Pamlico Sound had a 3-course breakfast that has been voted “Best in Outer Banks” by National Geographic. Course 1 was a fruit cup, 2 was a muffin, and 3 was a variation of quiche or souffle. 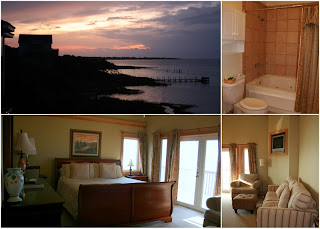 On our first day in the southern parts of the Outer Banks, we drove up to Rodanthe. The house in the top left corner is the one they used for the movie Nights in Rodanthe. It’s beautiful, but very close to the water so it might not be standing too much longer. Then, we drove just north of Rodanthe and walked through the dunes to the beach. We had the whole beach to ourselves! The photo of the kite boarder you see below was taken on another beach (and it’s not Adam), but I thought it was cool so I included it here. Later that night, we took a picnic to the ferry docks to watch the sunset. 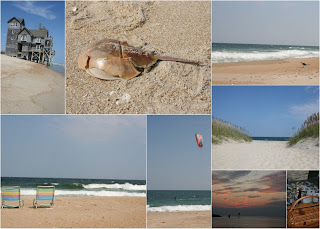 The next day, we toured the Chicamocomico Life Saving Station and the Cape Hatteras Lighthouse. At the lighthouse, we saw the coolest thing in the sidewalk. An entire lizzard was fossilized in the cement! Have you ever seen anything that crazy?? 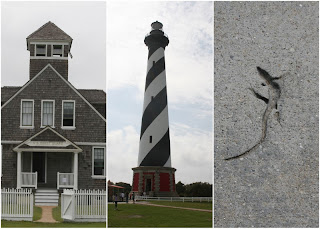 Alas, our last day of vacation arrived. We spent our final day on Ocracoke Island, accessible only by ferry. We visited the Ocracoke Lighthouse, found some fun photo opportunities, and played in an abandoned lifeguart post. While we were walking around the island, we came across the cutest dogs! I just had to take a picture with them! Right after Adam took this photo, the puppy gave me a big sloppy kiss up the side of my face. Nice! 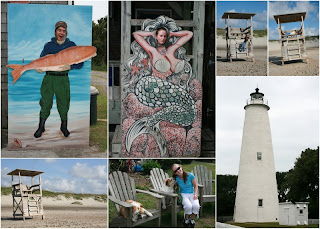 It was an amazing vacation, and I recommend you go too! The peak tourism season in the Outer Banks typically ends around Labor Day. That’s why we had the whole beach to ourselves! If you love crowds, go during the summer. But if you want a quiet escape, go in September while the weather is still warm, many of the attractions & restaurants are still open, and there are fewer tourists!